It’s officially Apple day starting right now. Kicking off the WWDC keynote this morning Tim Cook is already off to a good start by talking numbers, and surely more will be coming. While we’re expecting tons of exciting news and updates on iPhone 5 sales, lets talk retail stores. Tim confirmed they now have over 407 retail stores across 14 countries, and they serve million of users daily.

Not only did they just release a stunning and beautiful store in Berlin, Germany, but they have over 400 other stores across the world for all their users. Tim’s talking how much “customers love the buying experience” and is even talking about their 50 billion downloads milestone. Which isn’t new.

What is new though, is that they have just announced just how many customers and Apple fans enjoy those stores. How man? Nearly 1 million customers get served on a daily basis in an Apple Retail store. That’s impressive. Not quite Walmart, but they’re rocking over there in Apple land. 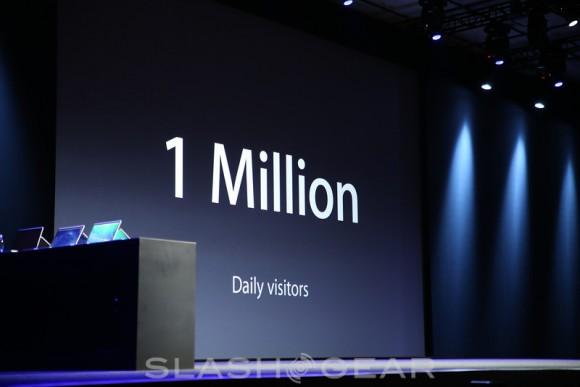 Then Cook is taking the moment to talk about numbers, which we’ll talk more about as he fills out the details. He did state they now have nearly 900,000 apps in the App Store, and as mentioned above have seen over 50 billion downloads. Apple stores are always full of helpful staff, and clearly they won’t be slowing down anytime soon. If you haven’t been able to enjoy the NYC store, you might want to do it soon. That or the Berlin location of course. Stay tuned to our Apple Hub for all the WWDC news throughout the day.