One of the biggest reasons why Apple Pay will be super simple for you to begin using in your everyday life is the roll-out of NFC payment checkouts due to Android. What’s that, you say? Android can let me pay with my phone too? Google Wallet was initiated quite a while ago, yes – and MOST Android-based smartphones with NFC inside can use it. Apple doesn’t require there to be an Apple Pay-specific checkout device present at every store, they only require a basic NFC-reading device which many major stories already have in place.

As Apple suggests, Apple Pay is already “accepted at 220,000 stores and counting.” The icon you see here is not made by Apple, it’s a standard NFC checkout logo. This logo exists out in the wild already, and has existed for some months in some places, and years in others.

Below you’ll see a list of stores that accept Apple Pay – and incidentally accept Google Wallet – and half a dozen other NFC payment wallet apps as well. Apple does not have their own hardware implanted in any of these stores – they interact with NFC-based technology that’s swiftly becoming universal.

Apple Pay works with the credit card(s) you have attached to your iTunes account and/or whatever cards you add to your phone with your Passbook app. Adding a card is as simple as tapping in the card’s numbers and security code. You can also use your front-facing camera (iSight camera) to photograph your card to make it simpler. 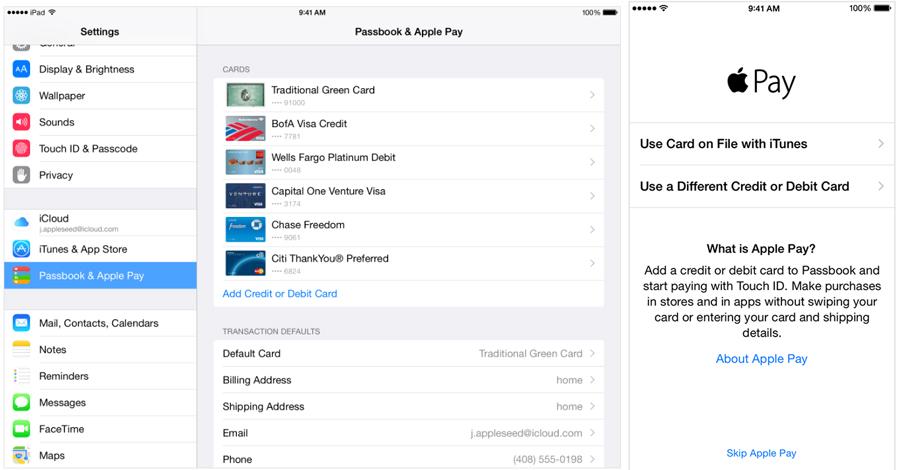 When you get to the checkout, it’ll be as simple as the demo you see below. This was done by Apple at the Apple event for the iPhone 6 and iPhone 6 Plus.

The same is true of your Android device, if you have one. You’ll just tap it against whatever NFC payment console you’re working with and press OK on the screen instead of holding your finger on a Touch ID sensor.

Now we’ll see which major stores – like Wal-mart, for example – bring on NFC payments first where before they’ve been resistant. It’s almost time to ditch the credit cards altogether.