A new patent application from Apple released today reveals the company’s recent foray into new methods for establishing communication between devices close to each other for the purposes of sharing data. In its application, Apple proposes the use of next generation camera systems and identifying marks such as barcodes and possibly even invisible ink to allow recognition and verification between devices. If you’re trying to see which company is pushing the boundaries between device-based data sharing, Apple certainly makes a compelling statement with this patent filed today.

The devices could share the keys using any suitable approach, including for example providing the keys in a manner that an image captured by each device could include the other device’s key. For example, devices could be placed opposite each other (e.g., face-to-face, face-to-back, or back-to-back) such that a camera of the device includes the other device in its field of view… In one implementation, one or more cameras of the first device could capture images of the device environment. The first device could process the captured images to detect a second device in the field of view, and to identify one or more cameras of the second device.

Apple also details a variety of situations in which users might wish to quickly establish secure connections between devices, from social networking (Twitter sharing) to gaming (multiplayer gaming could heavily benefit from connecting multiple devices available for a specific game and sharing data like in-game statistics with each player) to retail transactions. Apple also describes how a user could instantly log into a device such as a computer by using a digital handshake that came from another more secondary device, well, a device like an iPhone or iPad.

As for where the digital key might be concealed, Apple details several possible implementations, including directly in the glass bezel of a device like iPad (invisible to users’ eyes), built-into the Apple logo on the back of a device like an iPhone, or hidden in special coatings somewhere else on the hardware itself. We hope that Apple is already testing out this new technology, since it’s something we’d love to see in the new iPhone or iPad. 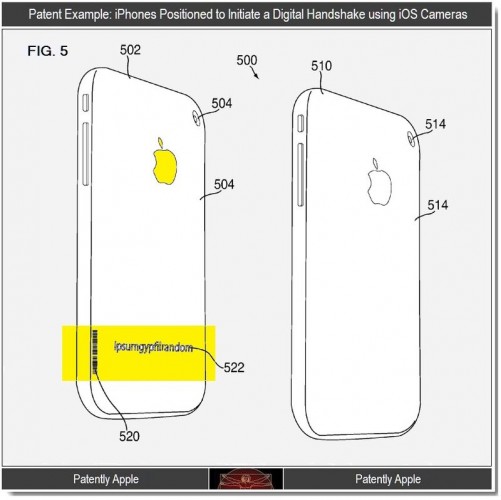