Apple has a long and rich history with their popular Desktop OS. OS X has been a staple in the computing world for a long, long time. Today they’ve just announced Sea Lion? All jokes aside, since they’ve ran out of Big Cat names to follow up Mountain Lion, Leopard and more, they’ve moved on to a California naming theme. Starting with the sea and surfing mavericks right in their backyard.

Today Apple has officially announced OS X 10 and the new naming scheme. Being built and developed right in California the next 10 years we’ll be enjoying California-themed naming. Starting with OS X 10 Mavericks which is being detailed on stage as we speak. I’m still laughing over the “Sea Lion” joke.

Obviously the details are not all yet known, but Apple is on stage at the moment sharing a few of many new features we can expect with Mavericks. They’re talking about finder tags, multiple screen features and much much more. Obviously with the all new Mac OS X 10 Mavericks there will be plenty of new features, so we’ll run down them all as they come in. 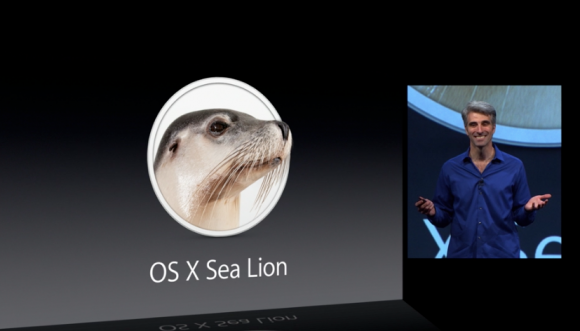 Multiple displays is another biggie here with OS X 10 Mavericks, and being able to truly multitask with ease. Changing and accessing the menu bar and dock across all displays, and memory management and more. As soon as Apple shares more details, and releases the full update list we’ll surely get hands-on and share the details. Stay tuned to our Apple Hub for all the news.

So what do you guys think? The big cat naming is the past, and California themes will be the future. Do you like the new name Mavericks?