Apple and Samsung may currently be duking it out in the court room, but a freshly-surfaced Apple presentation from 2010 shows that the iPhone maker tried to strike a licensing deal with Samsung long before the jury became involved. Apple, as many of you already know, is taking Samsung to court over allegedly copying the iPhone in its own devices, but this new presentation shows that Apple tried to resolve the dispute by offering to license its patents to Samsung. Given the fact that Apple is currently suing Samsung for $2.5 billion, it seems that negotiations didn’t go so well.

AllThingsD reports that Apple patent licensing director Boris Teksler referenced the October 2010 presentation during his testimony yesterday. The presentation shows that Apple was asking for $30 on each Samsung smartphone sold (dubbed “advanced mobile computing device” in the presentation), and $40 for each Samsung tablet. If Samsung had agreed, Apple was projecting that it could have made $250 million from the licensing deal in 2010, a figure which can hardly be considered chump change.

Apple was willing to give Samsung discounts on royalties too, seeing as how it considered Samsung a “strategic supplier.” For instance, Samsung could have enjoyed a 20% discount if it chose to cross-license its own patent portfolio to Apple. Phones using an Apple-licensed OS were good for a 40% discount, and phones that didn’t use proprietary features – Apple references the Samsung Blackjack II in its presentation, which has a physical QWERTY keyboard – would have qualified for another 20% off. 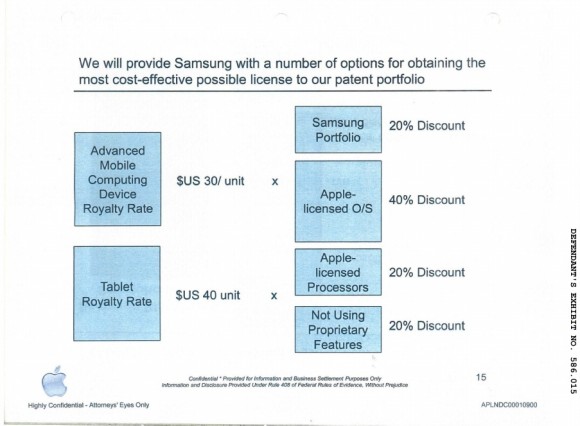 Samsung, obviously, wanted nothing to do with this licensing deal, and Teksler said in his testimony that none other than Steve Jobs and Tim Cook were driven to confront Samsung executives about the similarities between the Galaxy S and the iPhone. Hopefully Samsung made the right choice in turning down that licensing deal, because if it loses this case, it could end up owing Apple a lot more than it would have been paying in royalties. Samsung is set to begin calling its own witnesses to the stand on Monday, so keep an ear to SlashGear for more information on this high-profile trial.