When it comes to repairing an iPhone, Apple hasn’t exactly been shy about doing everything it can to drive people away from independent shops. The company has tried to make third-party or DIY repair difficult for end users, preferring that they take their iPhones to an Apple Store for repair instead. The latest move against DIY repair sees Apple hiding health data about replaced batteries – even if the battery you’re using as a replacement is an official Apple one.

As detailed by The Art of Repair on YouTube and further expanded on by iFixit, attempting to replace the battery in newer iPhone models will often trigger a “Service” alert in the phone’s Battery Health menu. Typically, that menu will surface information about your battery’s maximum capacity and peak performance capability, giving you a better idea of when your battery needs to be replaced.

However, when you replace the battery yourself or go to an independent shop and have them replace the battery, you’ll often see a message in the Battery Health menu that reads, “Unable to verify this iPhone has a genuine Apple battery. Health information is not available for this battery.” This happens even when you use an official Apple battery, though for the moment it seems to be limited to the iPhone XS, XS Max, and XR. 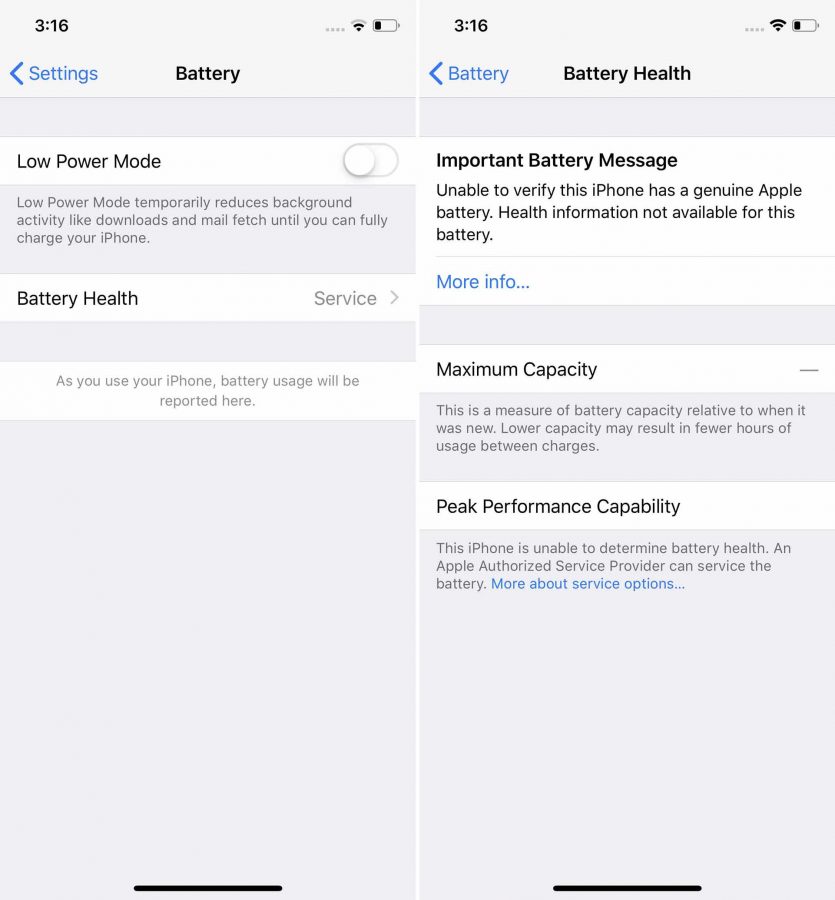 It seems that Apple is using a proprietary version of a Texas Instruments microcontroller to authenticate the battery when it’s installed in the phone. Apple technicians can reset the authentication key when the battery is replaced, allowing the Battery Health menu to function normally, but those are tools third-party shops don’t have access to.

iFixit notes that this authentication feature doesn’t actually affect battery performance, so if you swap out a battery using methods Apple doesn’t approve of, the new battery will function normally. Still, you won’t be able to get a readout on your battery’s health until you take your phone to an Apple Store and pay them for a replacement, which is annoying to say the least.

Things get even worse when you remember that Apple started blocking third-party battery health apps with the release of iOS 10, making it even more difficult to check your battery’s max capacity without relying on Apple. In the end, this is just another play to ensure as many repairs as possible go through Apple and no one else, and it serves as a another good argument for why Right to Repair legislation is in the best interests of consumers.

Update: Apple has pushed back at accusations that this is all down to self-interest when it comes to battery repairs, arguing that it’s a surfeit of safety that has prompted the warning message.