While the new 27-inch iMacs may be Apple’s eye-catchers, especially in Apple Stores, it’s the company’s new Magic Mouse peripheral that will find its way to the most desks. By junking the trackball of the Mighty Mouse and replacing it with a touch-sensitive surface, Apple have not only catered for the demands of desktop users calling out for multitouch, but bypassed ongoing reliability frustrations of the mechanical ball. After the cut, our live Magic Mouse gallery together with some hands-on first impressions.

In the hand, the Magic Mouse is flatter than the Mighty Mouse, though the level surface does sit under the first two fingers neatly. It still clicks if you apply pressure – and will automatically choose a left- or right-click depending on where your fingers are in contact, just as before – but now recognizes one- and two-finger gestures. You’ll need to install the driver for anything more than basic mousing, which does demand a restart, but after that reconnection is as seamless as with its predecessor. 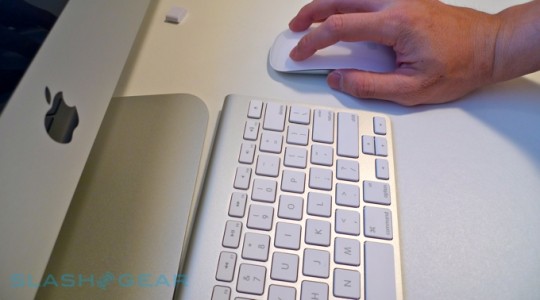 Something that’s oddly absent, though, is pinch-zoom. While the movement itself isn’t as natural on the Magic Mouse’s surface as the other gestures it recognizes, we’d still like to see it added in. There’s also no three-finger gestures like flipping between open apps on a MacBook Pro, or four-finger Exposé, and you can’t tap to click. We’ve had a quick trawl of the settings and it doesn’t look like this is something you can enable, either. 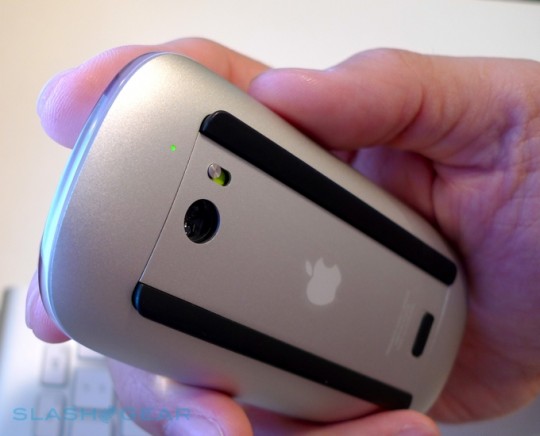 Still, two-finger side swipes work well, and the quad-directional scroll is just as you’d expect. We’ll be playing with the Magic Mouse some more before giving our final judgement.