Apple Lighting port not identical on both sides

A bit of investigation done on Apple’s iPhone 5 and the Lightning cord and docking port this week has turned up an oddity: the pins on both sides are not the same as one another. It would appear, according to Double Helix Cables’ own pro Peter that the 8-pin lineup is not in the same order on both sides of the cord’s head. Because of his discovery that one pin does the same as the pin that’s directly behind it, Peter has proven that Apple must be using some sort of process to dynamically identify which pin order the cord is currently using – depending on which side is up and which is down, that is.

The Apple Lighting cord you’ll be getting – or have already gotten – with your future Apple mobile products is indeed reversible. You can plug it in without looking and you’ll always be putting it in the right way up. With the new cord working one way or the other like this, one would expect the order of the pins to be 1 2 3 4 5 6 7 8 no matter which side is up – but what Peter has discovered is that the same signals are coming from pin 2 on one side and pin 7 on the other. In other words, if you could see straight through from one side to the other, each pin would be the same straight through. 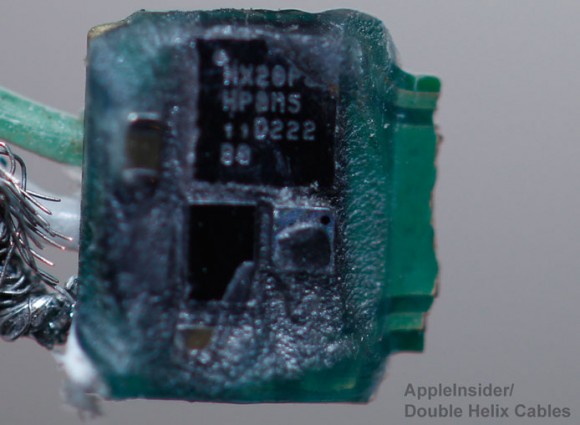 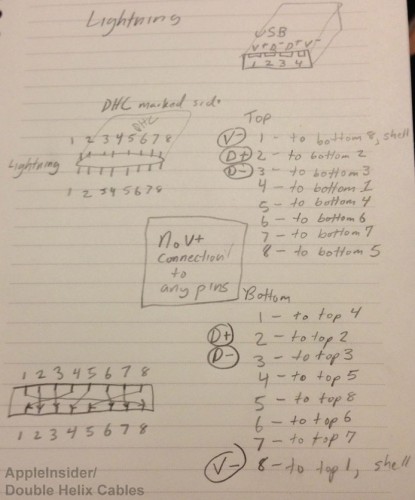 Peter also discovered this Authentication Chip in the Lighting cord – this means that anyone hoping to create 3rd party cords will be having one whole heck of a lot more trouble doing so than they did with past generations. Each cord has a chip, each chip more than likely lets the device it’s plugging into what it’ll be delivering through which pin. The complexity of each element in the Apple mobile universe continues to expand – let us know what you think of it!