Apple have patented a special glove which would allow wearers to still use their iPhone despite keeping their hands toasty warm.  Due to the way the cellphone’s capacitive multitouch display works, relying on the electrical response of the user’s fingers in order for contact to be recognized, the original iPhone, iPhone 3G and iPod touch will not respond to presses if the user is wearing gloves too thick for that response to be transfered.  Apple’s solution is a multi-layer fabric, the inner lining of which mimics the electrical conductivity of skin.

Holes in the ends of the fingertips could be opened to allow contact between this inner layer and the touchscreen itself.  They could then be closed up, with the patent describing multiple methods permitting this (including an elastic ring or even removable finger-caps).  By not leaving them permanently open, the basic heat-retaining properties of the gloves are not impaired.

The application lists Steven Hotelling and Ashwin Sunder as inventors, and was filed on June 28th 2007 (a day before the original iPhone’s launch).  It remains to be seen whether these peek-a-boo gloves will ever reach the market – perhaps they’re to be the “next big thing” at Apple’s final MacWorld keynote. 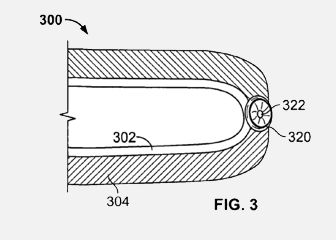