When you think about your iPhone, you think about all the cool things that it can do. You know, all those media functions, and downloading, watching, just about anything you can think of (except watching Flash videos, of course). And when the iPad got announced, with Netflix in tow, many iPhone owners out there felt like they were missing out. Well, you’ve waited long enough, because it’s coming very soon. Oh, and so is Farmville. (You’ve heard of that before, right?)

Reed Hastings came up on stage to talk about Netflix, and what it means to get it on your iPhone. Obviously one of the first things he wanted to bring up was how it was going to work on the go, and he informed the crowd that it’s going to use an adaptive bitrate technology, to make sure that if you switch “networks,” (like your 3G connection, to WiFi, for example), that the streaming isn’t ruined because of the transition. Ultimately, mobility isn’t sacrificed, and for something like the iPhone, that’s huge. As for a release date, Hastings was happy to announce that it’s coming as a free download to the iPhone App Store in the Summer. 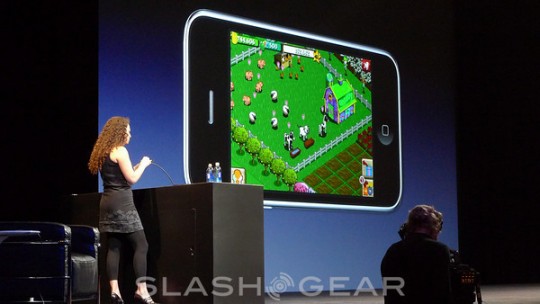 Now, one of the biggest complaints about the iPhone’s lack of Flash is the fact that you can’t play Flash games. Luckily for the Cupertino juggernaut, you only need to create an application to get around that. And now Farmville is coming to the iPhone. “Farming for the iPhone.” It will allow you to sync up to your Facebook, and it will use push notifications to inform you of changes as they happen. It’s due out at the end of June.

For up-to-the-minute coverage, check out our liveblog: http://live.slashgear.com. And keep your eyes here for the news as it happens!