Well, that didn’t take long at all. Steve Jobs has come out on stage at this year’s WWDC to blow the socks off everybody out there, and while he believes that the iPhone 4 is, “Beyond a doubt the most precise thing, the most beautiful thing we’ve ever made,” we’ll have to wait and see it in our hands (hopefully today) before we can make a final judgment. But, it’s announced!

External controls include volume up/down, mute, there’s a front facing camera, micro-SIM, camera with LED flash, microphone on the bottom with the 30-pin Dock Connector and speaker. On top is the headphone jack and a second microphone for noise cancellation, plus the power button. It’s 9.3mm thick – that’s 24% thinner than the iPhone 3GS and the thinnest smartphone on the planet. Glass front and back; stainless steel edging. “Closest kin is an old Leica camera.” 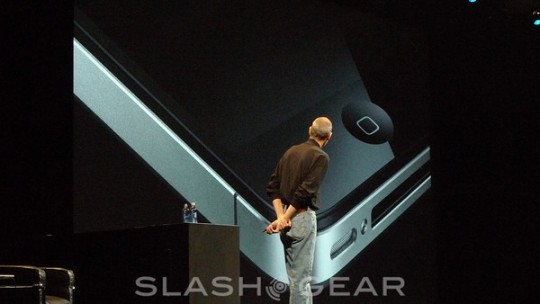 And with that, we’ve got the next iteration of the iPhone family of devices. Stay tuned, as more is coming!

http://live.slashgear.com for all the updated news as it breaks!

SAN FRANCISCO, June 7 /PRNewswire-FirstCall/ — Apple® today presented the new iPhone® 4 featuring FaceTime, which makes the dream of video calling a reality, and Apple’s stunning new Retina display, the highest resolution display ever built into a phone, resulting in super crisp text, images and video. In addition, iPhone 4 features a 5 megapixel camera with LED flash, HD video recording, Apple’s A4 processor, a 3-axis gyro and up to 40 percent longer talk time–in a beautiful all-new design of glass and stainless steel that is the thinnest smartphone in the world. iPhone 4 comes with iOS 4, the newest version of the world’s most advanced mobile operating system, which includes over 100 new features and 1500 new APIs for developers. iOS 4 features Multitasking, Folders, enhanced Mail, deeper Enterprise support and Apple’s new iAd mobile advertising platform. iPhone 4 will be available in the US, UK, France, Germany and Japan on June 24, starting in the US at just $199 for qualified buyers with a two year contract.*

“iPhone 4 is the biggest leap since the original iPhone,” said Steve Jobs, Apple’s CEO. “FaceTime video calling sets a new standard for mobile communication, and our new Retina display is the highest resolution display ever in a phone, with text looking like it does on a fine printed page. We have been dreaming about both of these breakthroughs for decades.”

FaceTime is as mobile as your phone, so you can see your loved ones and friends anywhere there is Wi-Fi. Using FaceTime is as easy as making a regular voice call, with no set-up required, and you can instantly switch to the rear camera to show others what you are seeing with just a tap.

Apple’s stunning 3.5 inch Retina display has 960 x 640 pixels–four times as many pixels as the iPhone 3GS and 78 percent of the pixels on an iPad(TM). The resulting 326 pixels per inch is so dense that the human eye is unable to distinguish individual pixels when the phone is held at a normal distance, making text, images and video look sharper, smoother and more realistic than ever before on an electronic display.

iPhone 4 is the thinnest smartphone ever–9.3 millimeters–with an all-new design and build quality like no other mobile device. The front and back are made of aluminosilcate glass, chemically strengthened to be 30 times harder than plastic, more scratch resistant and more durable than ever. The front and back glass have an oil-resistant coating that helps keep it clean, and encircling iPhone 4 is a highly finished stainless steel band made of a custom alloy that is forged to be five times stronger than standard steel.

iPhone 4 features a new 5 megapixel autofocus camera with a 5x digital zoom, a backside illuminated sensor and built-in LED flash that allows you to take amazing pictures even in low light and dark environments. iPhone 4 lets you record and edit incredible HD video and the popular tap to focus feature now works while recording video. You can use the iPhone 4’s LED flash for both still photography and video recording. The new iMovie® app for iPhone lets you combine movie clips, add dynamic transitions and themes and include photos and music, and users can buy it for just $4.99 through the App Store right on their phone.

iPhone 4 is the best mobile device ever for games and entertainment, with access to tens of thousands of games and entertainment apps on the revolutionary App Store. Every iPhone 4 has a built-in 3-axis gyro that when combined with the accelerometer provides 6-axis motion sensing such as up and down, side to side, forward and backward and pitch and roll, making it perfect for gaming. Developers can access the gyro using the new CoreMotion API to make games and other apps that go well beyond what other mobile devices offer.

iPhone 4 comes with iOS 4, the newest version of the world’s most advanced mobile operating system. With over 100 new features, it includes Multitasking, Folders, enhanced Mail, deeper Enterprise support and Apple’s new iAd mobile advertising platform. With Multitasking, users can now instantly switch between any of their apps while preserving battery life. With Folders, users can easily organize their apps into collections by simply dragging one app on top of another. A folder is automatically created and named based on the category of apps selected. Users can change the name of any folder at any time. In addition, users can now customize their lock and home screens with an array of supplied wallpapers or with any of the photos on their phone.

The new iBooks® app will be available for iPhone 4 as a free download from the App Store and includes Apple’s new iBookstore, the best way to browse, buy and read books on a mobile product. The iBooks app will sync your current place in a book, along with any bookmarks, highlights and notes you have created, between copies of the same book on your iPad, iPhone or iPod touch®. iBooks users can also now read and store PDFs right in iBooks. There are now over 60,000 books available in the iBookstore, and users have downloaded over five million books in the first two months.

More than five billion apps have been downloaded from the revolutionary App Store and more than 225,000 apps are available to consumers in 90 countries. Almost 100 million iPhone and iPod touch users around the world can choose from an incredible range of apps in 20 categories, including games, business, news, sports, health, reference and travel.

iPhone 4 delivers an amazing seven hours of talk time on 3G networks, up to 10 hours of web browsing on Wi-Fi and up to six hours on 3G, and up to 10 hours of video playback and up to 40 hours of audio playback.** iPhone 4 is powered by Apple’s new A4 processor that provides exceptional processor and graphic performance along with long battery life. iPhone 4 features a second microphone and advanced software to suppress unwanted background noise for improved call quality when in loud places. iPhone 4 also offers 802.11n Wi-Fi networking and adds quad-band HSUPA to provide 7.2Mbps downlink and 5.8Mbps uplink capability.***

iPhone 4 comes in either black or white and will be available in the US for a suggested retail price of $199 (US) for the 16GB model and $299 (US) for the 32GB model in both Apple and AT&T’s retail and online stores, Best Buy and Wal-Mart stores. iPhone 4 will be available in the US, France, Germany, Japan and the UK on June 24 and customers can pre-order their iPhone 4 beginning Tuesday, June 15 from the Apple Online Store or reserve an iPhone 4 to pick up at an Apple Retail Store. iMovie for iPhone will be available on the App Store for just $4.99 (US).

Apple ignited the personal computer revolution with the Apple II, then reinvented the personal computer with the Macintosh. Apple continues to lead the industry with its award-winning computers, OS X operating system, and iLife, iWork and professional applications. Apple leads the digital music revolution with its iPods and iTunes online store, has reinvented the mobile phone with its revolutionary iPhone and App Store, and has recently introduced its magical iPad which is defining the future of mobile media and computing devices.