Apple iOS grabbed OS share lead in US in Q4

New smartphone sales data is in for the US looking at Q4 2014 from Kantar Worldpanel CamTech. The data from the research firm shows that Apple iOS lead the US OS share for the first time since Q4 2012 during the important 2014 holiday shopping season. The metrics show that Apple’s sales grew market share in the US, Europe, and China during the quarter.

Metrics show that the iPhone 6 was the best selling smartphone in the US during the holiday quarter and was the most popular smartphone to give as a gift as well. Samsung was in the number two spot with its popular Android-powered Galaxy S5 smartphone.

In Europe Android saw its market share decline by 3.8% points year-on-year ending at 66.1%. While Android declined in Europe, iOS grew its share by 6.2 percentage points. The biggest gains for Apple in Europe came from Great Britain where iOS grew by 13.1% during Q4. Samsung, LG, and Sony all saw their market share decline year over year and compared to the previous quarter. 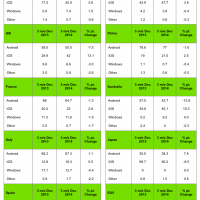