When iPhone OS 4 (or should we say iOS4) was shown off a few months back, we had a pretty good demonstration of how Apple’s new, revolutionary mobile advertisement platform was going to work. But, it wouldn’t be an Apple keynote if we didn’t get to see it in action again. Of course, there’s a few more pieces of information in there that are worthy of mention, but we all know Steve Jobs just wanted to show it off again.

Apple are expecting to take 48% of the whole mobile advertising market, and wants developers to try it out. He apparently thinks that it will be a great success for them, too. And, considering the platform, and how many devices it would be on, that’s probably pretty accurate. Apparently they’ve $60m committed for iAds from advertisers in the second half of the year. 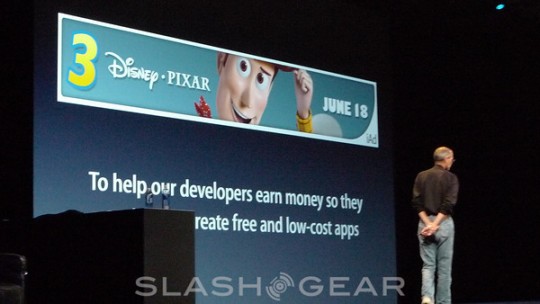 As for partners, here’s who you’re looking at (so far): Nissan, Citi, Unileve, AT&T, Chanel, GE, Liberty Mutual, State Farm, Geico, Cambells, Sears, JC Penny, Target, Best Buy, Direct TV, TBS and Disney all onboard! Now, keep in mind that this is all still breaking, so stay tuned to the liveblog to keep updated as it happens. And, we’ll have a video demonstration of iAds soon enough, so stay tuned for that, too.

Apple to Debut iAds on July 1

Over $60 Million in 2010 Commitments from Leading Global Brands

“iAd offers advertisers the emotion of TV with the interactivity of the web, and offers users a new way to explore ads without being hijacked out of their favorite apps,” said Steve Jobs, Apple’s CEO. “iAds will reach millions of iPhone and iPod touch users–a highly desirable demographic for advertisers–and provide developers a new way to earn money so they can continue developing free and low cost applications.”

“iAd will allow Citi to reach millions of people on their iPhone and iPod touch,” said Lisa Caputo, executive vice president and CMO, Citigroup. “iAd gives us a remarkable level of creativity for creating ads to connect with our current and future customers in a more interactive style than ever before.”

“iAd is going to revolutionize mobile advertising,” said Rob Master, North American media director, Unilever. “With iAd, we’ve been able to create some of our most powerful and compelling ads ever. iAd is the perfect mobile format to reach and engage with our customers.”

iAd, which is built into iOS 4, allows users to stay within their app while engaging with the ad, even while watching a video, playing a game or using in-ad purchase to download an app or buy iTunes® content.

Developers who join the iAd Network can easily incorporate a variety of advertising formats into their apps. Apple will sell and serve the ads, and developers will receive an industry-standard 60 percent of the iAd Network revenue, which is paid via iTunes Connect.

iAds require iOS 4, which will be a free software update via iTunes 9.2 or later for iPhone and iPod touch customers. iOS 4 will work with iPhone 3G, iPhone 3GS, iPhone 4, and second and third generation iPod touch (late 2009 models with 32GB or 64GB).

*Percent of forecast based on an annual run rate basis, starting on July 1. US Mobile Display Advertising forecast from the report by JP Morgan, “Nothing But Net–2010 Internet Investment Guide,” January 3, 2010.

Apple ignited the personal computer revolution with the Apple II, then reinvented the personal computer with the Macintosh. Apple continues to lead the industry with its award-winning computers, OS X operating system, and iLife, iWork and professional applications. Apple leads the digital music revolution with its iPods and iTunes online store, has reinvented the mobile phone with its revolutionary iPhone and App Store, and has recently introduced its magical iPad which is defining the future of mobile media and computing devices.

© 2010 Apple Inc. All rights reserved. Apple, the Apple logo, Mac, Mac OS, Macintosh, iPhone, iPod touch and iTunes are trademarks of Apple. Other company and product names may be trademarks of their respective owners.