It appears the ultra-shallow keyboard keys on Apple‘s new 12-inch Retina MacBook were only the beginning. The company was granted a patent this week that may one day see a complete revolution in keyboard functions, possibly eliminating the need for a touchpad altogether. Dubbed a “fusion keyboard,” the input device would still feature the mechanical keys we’re used to today, but each one would have touch sensors on top, and they could each be pressed down to register multiple stages, enabling multitouch gesture support.

Basically, each key top would be like a tiny trackpad with capacitive touch sensors. They could detect things like swipes and the softest taps, just like an iPhone or iPad’s screen. This would turn the entire keyboard — or just a portion of it, if touch sensors were only applied to a select group of keys — into a segmented trackpad, with tiny gaps still allowing individual keys to be pressed. 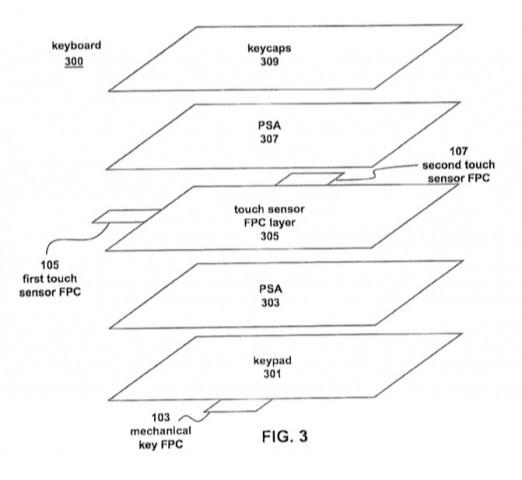 You could click, drag, scroll, and perform other gestures by moving your fingertips across the top of those keys. And because the keys can still be depressed, users could type with the tactile feedback they’re used to. Apple’s patent describes the keyboard as being able to determine each hand’s input individually, allowing one hand to use touch input for cursor movement and the other hand to enter data by button presses.

Now, when it comes to those key presses, they would function just like multi-stage switches. A single key could be pressed down to the first level for one input, or pressed even further to register a different input. Apple provides one example as pressing a key to the first level to input the letter it is assigned to, while pressing the same key to the second level could act as a mouse click. 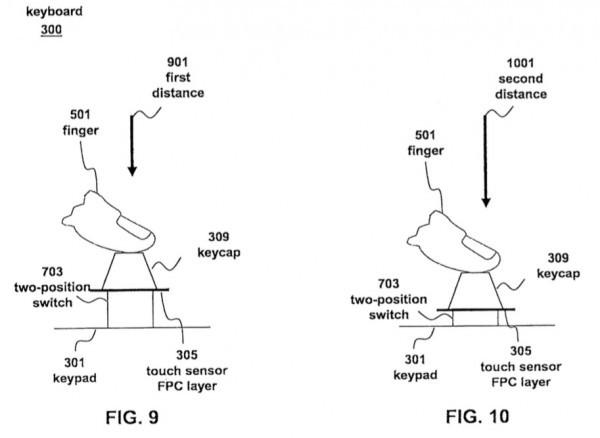 The obstacle with this technology would be how to determine when physical contact is made with a key is meant as a touch gesture, or as the beginning of a physical press. The patent describes one solution as being time-based, meaning if the key “F” is touched, a physical key depression must be made within a certain amount of time to recognize a keystroke, otherwise it would be a touch input.

Like any of Apple’s patents, it’s hard to know if or when this technology will make its way into a consumer product. But with the way the MacBook Air and new Retina MacBook line have been getting thinner and thinner, it’s easy to imagine a fusion keyboard finding a home in a notebook.