Apple has filed for a patent that would use a new, circular polarizing film to both improve outdoor visibility of devices like the iPad and iPhone, as well as allow those wearing polarized sunglasses to better see the screen. A so-called “retardation film” would convert the linearly polarized light from an LCD display into circularly polarized light and thus reduce distortion. The system could allow Apple to make a future iPad – or iPad case – that can be used in direct sunlight like an e-paper ereader, but still taking advantage of the video-capable benefits of traditional LCD.

Apple envisages the film either being applied as a top layer, presumably similar to an adhesive screen protector, or physically bonded to the glass as part of the production process. Alternatively, it could be “incorporated into a display cover which can be attached to the display mechanism,” potentially as a viewing panel in a new iPad or iPhone case.

Now, as with all patent applications, there’s no telling whether we’ll actually see Apple develop this into a commercial product. However, it’s an alternative to using e-paper displays for devices you want to be outdoor-visible, like ereaders, still allowing you to rely on video-capable LCD panels. 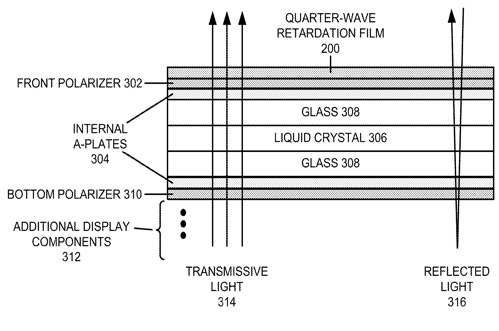