It would appear that Apple’s acquisition of Beats by Dre, aka Beats Electronics, aka Beats Music, has been finalized. With it comes a message from Beats, likely written by a top wordsmith from Apple. It sounds that way, anyway, bringing on words that deem Beats headphones worthy of sitting alongside the iPod, iPad, and iPhone as Apple’s key “instruments.”

The message begins with a note on how “musicians rely on their instruments to give structure and form to their imagination.” The message from Beats on their finalized buy by Apple continues: “at the dawn of digital recording, the Macintosh computer was the instrument of choice.”

You’re beginning to see a theme.

“At the beginning of portable digital music,” continues this Beats letter, “the iPod placed the library of the world’s music in your pocket.” Could Beats be saying they’re about to be a missing piece of this puzzle?

The letter continues, “the iPhone became not only an instrument for music but also the center of your connected life.” So we’re getting a bit away from music – not just music, but an all-encompassing tool. Sound nice – where is this leading?

“The iPad extended this capability with a user interface and apps that allowed you to compose a symphony on the subway.” Back to the underground, of course. “Starting today,” suggests this letter, “we at Beats are fortunate to add our instrument to this legacy by joining Apple.” 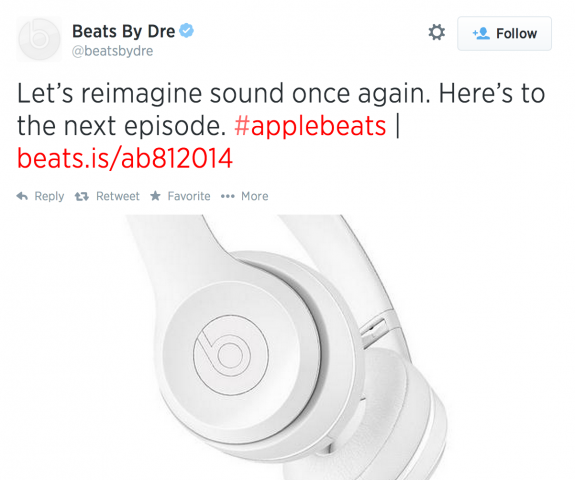 “Our instrument,” they say. The letter is produced and displayed with a pair of Beats Solo2 headphones – stark white. Is this an implication that Beats means to create something new, or that they’ve had as big an impact on the world with their headphones that Apple did with the iPhone?

The letter concludes with the following: “The products we build together will allow us to reimagine sound once again and to continue this great tradition of bringing imagination to life.”

Together – the products we build together. Reimagine sound once again.

Just encouraging words, or preparation for headphones that sound as good as they look? We’re hoping for the latter.