Previously, the world believed that the yummy chips coming in the iPad 2, those fabulously simple looking A5’s, were going to be TSMC. As Chipworks shows in their full teardown of the chip itself, the Apple A5 processor is fabricated by Samsung. Furthermore, several elements are discerned whilst comparing the chip to the A4 including memory, logic, and analog block areas. These are folks with either microscopes and precision tools or people with very very small hands. Either way, we’re excited to see the insides of chips!

The image you see above on the left is the chip as you’d be able to see if you took the device apart using a couple of plastic tools and a hairdryer. The interesting thing you can see in this image (on the right, above,) is the fact that all those little dots are solder balls. What these little dots tell Chipworks is quite interesting – the ones you want to pay attention to are the tinier ones which are the flip-chip solder balls attached to the actual A5 die. As the chip has quite a giant portion of itself covered with these smaller dots, it can be discerned that the die is itself quite large. In fact, the A5 die is shown to be more than twice as large as the die in the A4 [10.1 x 12.1 mm (122.2 mm2), vs 7.3 x 7.3 mm (53.3 mm2)  to be exact] – this, Chipworks says, is a very big clue pointing toward the idea that this chip is still made in 45-nm technology. 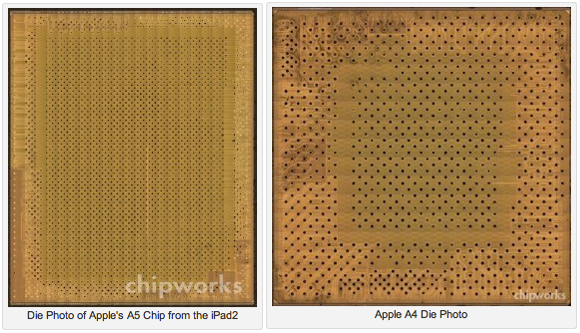 Chipworks have decided to toss some knowledge upon the Earth with the following: “the main innovation [in the iPad 2 when compared to the iPad 1] is the A5 chip.” It’s good, they say, and it’s still made by Samsung. They’d heard the rumor that Apple was rolling out with a TSMC A5 chip rather than Samsung, who they’d used on the iPad 1. To disprove this silliness, they cut out a cross-section of the A5 chip and compared it, on a microscopic level, to the A4 of the iPad 1. What did they find? 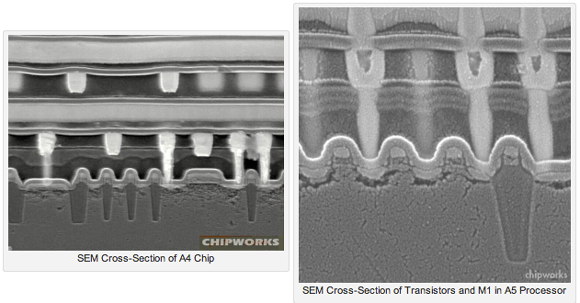 Upon zooming into the chip’s cross section at a transistor level, they show that the transistor gates and dielectric layers are so very similar that there’s basically no way this new chip could be anything BUT Samsung. How about that?