AOSMark tells which OEMs are best, worst at Android updates

There are two guessing games the Android community plays every time there’s a new version released. First is the name-guessing game on what dessert it’ll be named after. The other is when their phone will actually receive the update. The Android platform is notorious for its slow and fragmented update landscape though there are few references on how manufacturers actually fare in this regard. Enter AOSMark, a surprising new site that tries to praise or shame OEMs, depending on their Android update performance.

To be fair, Google has tried to do what it could to ease the burden, encourage, or even strong-arm Android phone makers into quickly updating their phones to the latest versions. Unfortunately, some OEMs are just too set in their ways to change. The best that the community could do is to call attention to OEMs that do good work and those that don’t.

It’s not a straightforward task, mind. There are little to no official records to base report cards on. Even AOSMark is using a secret formula that may cast some doubt on its methods. In a nutshell, it simply takes into account how many times an OEM usually upgrades a phone. Whether its formula considers the total number of phones an OEM has in the wild, the site doesn’t really say much.

Unsurprisingly, Google is at the top of the list with a score of 3 out of 6, despite having only a total of six phones in the market. AOSMark hints that if iPhones were included, they’d most likely get a near perfect score. LG is second from the bottom, reinforcing its recent tarnished image, while Samsung has surprisingly managed to beat more than 10 others. Essential is nowhere in sight though Nokia is rightfully near the top. Even more curious, the HTC One Google Play Edition from 2013 is crowned the most updated phone. 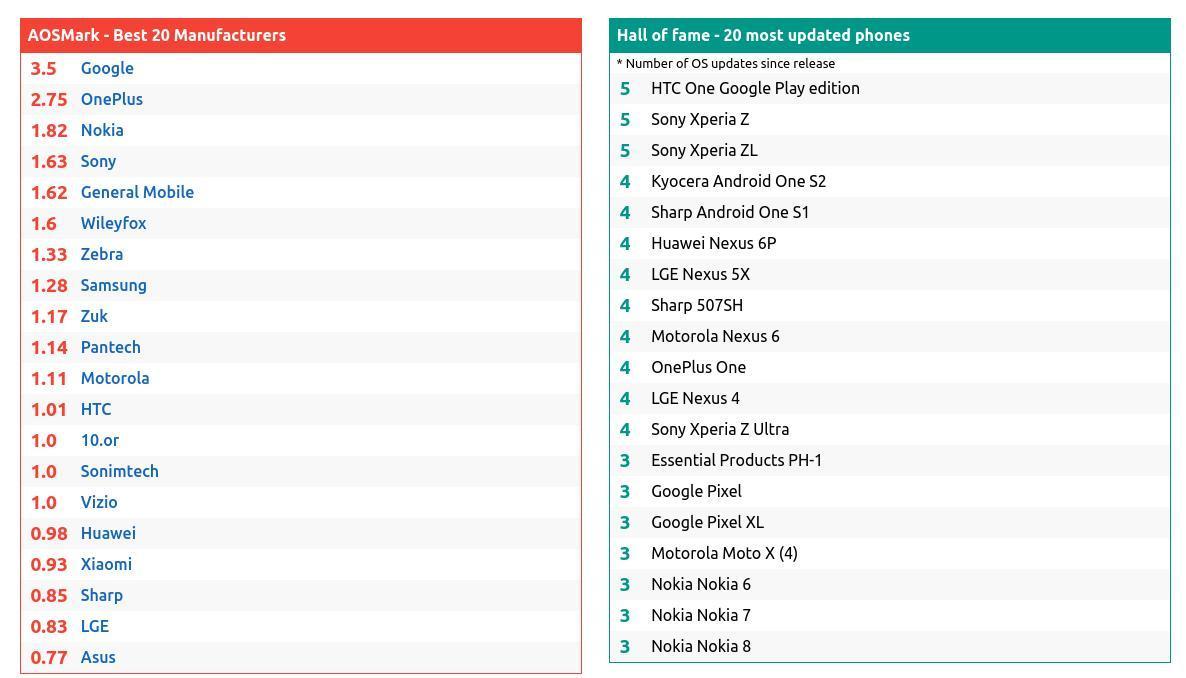 Take the numbers with a grain of salt though, with no one but AOSMark knowing exactly the method and sources of data. It is, admittedly, nearly impossible to do so from a foolproof scientific point of view so any approximation is useful already. Whether it influences these OEMs to do a better job, however, is an entirely different question.