Even while TV makers are still trying, sometimes hard, to sell the idea of curved screens in living rooms, they are already trying to make a grab for your desk. And just as curved TVs promise the ultimate immersive viewing experience, curved PC monitors make the same the same spiel for gaming. AOC’s two new gaming monitors, however, promise to be even more. Blending style and substance, these monitors give the illusion of floating on air thanks to having almost no bezels. But they also bring a dedicated keypad controller that looks both futuristic and weird.

Unlike many curved displays, especially TVs, the AOC AGON AG322QCX and AG272FCX have a softer curve of 1800R, which means that, if it were to form a full circle, it would have a radius of 1800 mm or 1.8 m, in contrast to the 4200R of many TVs. The top, left, and right edges of the screen seemingly have no bezels, though AOC still had to make room for one at the bottom. The end result is a promise of increased depth and reduced image distortion.

The larger AG322QCX has a 31.5-inch screen with 2560×1440 QHD resolution. The AG272FCX, on the other hand, only gets a 27-inch 1920×1080 Full HD panel. That is, on paper, the only difference between the two. Both share a fast 144 Hz refresh rate that is made even better by AMD FreeSync technology, banishing tearing, stuttering and input lag.

Gamers are a picky bunch when it comes to dispalys and have favorite settings for different occasions and games. Switching between those different settings, however, can be a hassle. That’s why AOC is throwing in a QuickSwitch keypad that lets users save and recall settings on the fly rather than go through menus again and again. Design-wise, the keypad eerily looks like a segmented thorax. 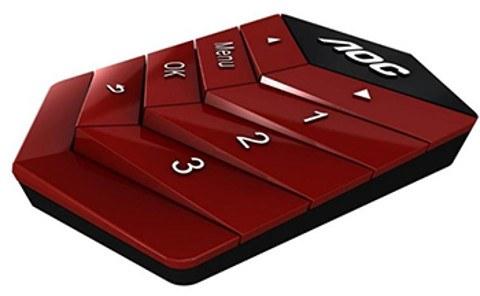