Benchmarking is almost like a game. Well, it really is a numbers game where companies try to reach for the highest (or lowest, depending on the ranking system) figures through any means possible, sometimes even through cheating. Still, it’s an interesting phenomenon to watch and to see how smartphone makers rank up in terms of perceived performance. AnTuTu, makers of one of the most popular smartphone benchmarking apps, has just released its September chart and, suffice it to say, the top-ranking phones are not what you might expect.

First, a preamble from AnTuTu on how the numbers have been gathered. They come primarily from its AnTuTu version 7 app, gathered from September 1 to 30 this year. The scores it presents have also been averaged instead of showing the highest score the phone is capable of. To this we add that much of AnTuTu’s numbers may have come from China considering the models that have been listed.

Right at the very top is the ROG Phone, which might not be that much of a surprise. It runs on a customized Snapdragon 845 clocked to run faster than any in the market. With its abundance (or overabundance) of cooling systems, the gaming smartphone is guaranteed to achieve maximums speeds without throttling. Not far behind is the Xiaomi Black Shark, with a more normal Snapdragon 845 but touted advanced cooling systems too.

So it isn’t surprising that gaming smartphones lead the way since they are designed especially for that kind of number-crunching performance. What may be surprising, however, is to find the Galaxy Note 9 at seventh place only. It was easily surpassed by the OnePlus 6 and even the vivo NEX S. Some might argue that the OnePlus 6’s lower res screen might help it achieve better performance, but the gap is just too wide to ignore. 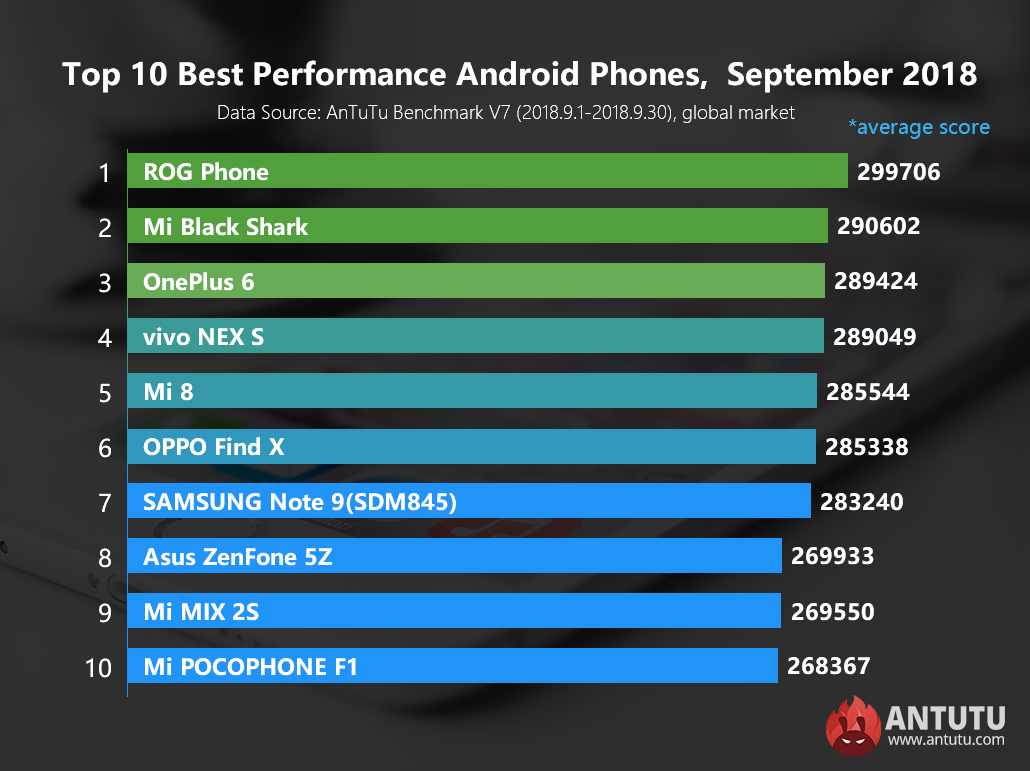 Of course, there might be other factors to consider, which is part of what makes benchmarks harder to use as a foolproof reference. AnTuTu’s numbers only come from users themselves and, thus, are skewed heavily in favor of the phones that are in such user’s hands. If the bulk of your users come from China, it won’t be surprising that the numbers will lean in favor of models that are more readily available in that market.