Today is not a good for those working behind the scenes at GoDaddy. TechCruch is reporting that an Anonymous member has brought GoDaddy down and, by extension, has brought down many of the sites GoDaddy hosts. Apparently, the attack was carried out by someone going by the name of “AnonymousOwn3r” on Twitter, and he says that he worked alone in bringing the website hosting service down.

Of course, this is causing a headache for more than just the folks at GoDaddy, as many business owners are seeing their sites go down as a result of the attack as well. Since the attack makes a number GoDaddy’s DNS servers inaccessible, many site owners who were using GoDaddy’s DNS service were affected by this breach. Customers are also saying that the company’s email and phone services are down as well.

GoDaddy itself has had to deal with a number of angry customers this afternoon, and at the time of this writing, the hosting service is still down for many. GoDaddy seems to be making progress, with one of its most recent tweets claiming that service has returned for some customers. With tens of millions of sites down, however, GoDaddy has its work cut out for it. 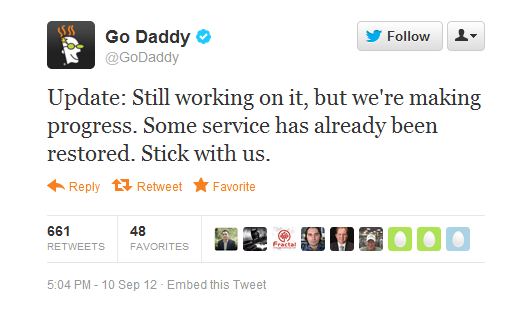 What’s interesting is that AnonymousOwn3r did this whole thing by himself. He hasn’t really given a reason for his attack on GoDaddy, saying in a tweet that the breach was meant to test GoDaddy’s “cyber security,” among other reasons that he can’t talk about now. A lot of GoDaddy customers are understandably calling him out on Twitter, so let’s just hope that the company can get everything back to normal soon. Stay tuned, as we’ll have more details for you as this story develops.