It will still be a few weeks before we see Android 5.0 in its final form, but the developer preview of Android Lollipop has already gone out and has led to some rather interesting discoveries. One of the features that may have been glanced over in the press release is one that Google has seemingly borrowed from the very first Moto X, a way to turn on the display or unlock the device, and view notifications, just by picking up the smartphone.

The feature, or rather the original incarnation of it, debuted on the 2013 Moto X as Active Display and later renamed to Moto Display in the new Moto X. The feature is both a way to save battery and to be more smart about waking up the screen and displaying notifications when and only when you need it. If a notification should arrive on your device, it will do nothing until you pick it up, in which case it will then turn on the display to show the relevant notification. This feature has been copied by third party apps in different ways and under different names, with some adding features such as being able to determine whether the phone is in a bag or pocket, in which case it will continue to do nothing even if it mistakenly thinks that it has been picked up.

“Where supported by the hardware, your device will wake up as soon as you pick it up or tap the screen twice”

The toggle for this feature can already be found in Android 5.0’s settings app under the label Ambient Display, but the exact implementation is still unknown. The related feature in Android Lollipops features list mentions that the hardware must support it, which we presume to be a combination of motion and ambient light sensors. However, there is another possible interpretation, one that still needs to be verified by a final build resting on perhaps the Nexus 6. 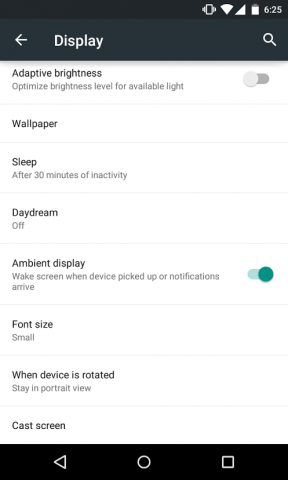 Active/Moto Display in the Moto X serves another function. It shows a very minimal snippet of notifications visible even when the device’s display is turned off, without putting too much strain on the battery. This is possible thanks to AMOLED technology, which requires no energy to “display” black pixels. Given that the Nexus 6 will feature a similar screen, it is possible that this feature will be present as well, though it is unknown how non-AMOLED devices will be treated.

There is another feature mentioned in the same breath, that of being able unlock the phone by tapping the display twice. This sounds very similar to the initial Knock Knock implementation that came with the LG G2, which has then been refined to the more sophisticated Knock Code incarnation. Like Ambient Display, details of this feature have yet to be confirmed with a final version of Android Lollipop.