There’s been a rather sizable increase in mobile units moved compared to last year, a 16.5 percent increase to be more specific, this being one of the more impressive statistics released in a Gartner study arriving today. This 16.5 percent is tied to the second quarter of this year, 2011, as compared to the second quarter sales from one year ago, this year’s total adding up to 428.7 million units. The leader of this pack of smartphones is Android, a very different situation compared to last year at this time when Symbian was still the very clear forerunner.

Smartphone sales to end users, a totally different number than what’s quoted above as final sales, were up a whopping 74 percent when compared to last year. This number of sales to end users accounts for 25 percent of overall sales in the second quarter of 2011, this again a gigantic 17 percent increase from the same period last year. The changes in sales for most of the devices on the big list of brands here in this Gartner study tell a different story. 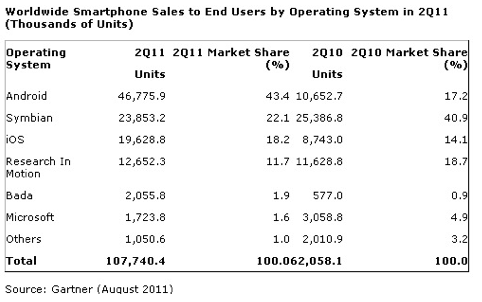 Research in Motion, the group responsible for BlackBerry devices, dipped from a 18.7 percent market share down to 11.7 percent, on the other hand selling approximately 1,000 more units than the same time last year. Bada having only had .9 percent of a share last year jumped up what must seem a large amount to them to 1.9 percent market share, while Microsoft, like RIM, dipped from 4.9 percent to 1.6 percent market share. If you were only taking a look at Bada and Microsoft, you’d think that consumers had lost faith in Windows Phone 7 and were going over to the Bada side of mobile, Bada selling nearly 1,500 units more than their 577 units last year, while Microsoft lost right around the same amount, 3,058.8 units sold last year, 1,723.8 units sold this year.

Then there’s the big guns. Android, Symbian, and iOS. The Apple story, that being the iPhone 4 and iPhone 3GS, the only two smartphone devices on sale running the iOS platform since this time last year, reads like a russian nesting doll being put together piece by piece; though iOS unit sales leapt from 8,743 in Q2 of 2010 to 19,628.8 in 2011, their market share only crept up from 14.1 percent to 18.2 percent. Why didn’t they take a bigger piece of the pie? Because the entire market jumped up along with them.

The top two spots are both brand new. Where Symbian held the market FIRMLY last year with a 40.9 percent market share, it now falls to second place with 22.1 percent. Android, on the other hand, takes a rocket into outer space with their jump from 17.2 percent market share in 2010 (placing them in third behind the then second RIM, to first with 43.4 percent. An astounding leap without a doubt. Symbian sales remain quite similar, having been at 25,386.8 units last year and 23,853.2 units this year, while Android made the biggest jump upward with 10,652.7 units in the second quarter of 2010 to 46,775.9 units in 2011. 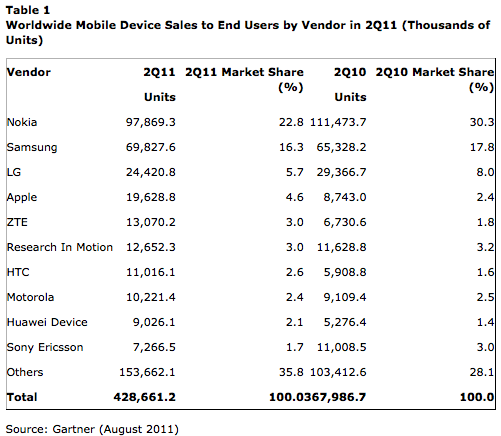 Then for mobile vendors we’re seeing Nokia firmly in the lead with 22.8 percent market share and 97,869.3 units over Samsung’s second place 69,827.6 units with 16.3 percent, both of these groups having remained in their top spots from the 2010 study conducted last year. The vendor list, very unlike the operating system list, has remained very similar to what it was a year ago, with only a handful of groups increasing their unit numbers from last year.