This week inventor Andrew Jason Conrad and Google have found their patent for intra-ocular devices appearing in the public thanks to the USPTO. These devices were first registered by Google back in October of 2014, and have just been published by the United States Patent and Trademark Office this week. This “intra-ocular device” is what Google describes as “an electronic lens that can be controlled to control the overall optical power of the device.”

What would this device consist of, you might wonder? It’d have a controller, a power supply, and several “bio-interactive components”. There’d have to be an external component of some kind – perhaps a connection to your smartphone, for example – but all processing would be done within the device within your eye.

Google’s patent for this device includes word of a processor, antenna, user controls, a display, and a communication interface. No specifics as of yet – perhaps Bluetooth.

The device is powered with an “energy harvesting antenna” – how that would work, we do not know.

Perhaps the most disturbing bit of this device – for those of you who are squeamish about anything eyeball-related – is the injection process. It goes like this:

In the images you see here, you’ll find that the device has an overall circular shape and has all rounded-edges – to avoid harming the eye it’s ever-so-close to. 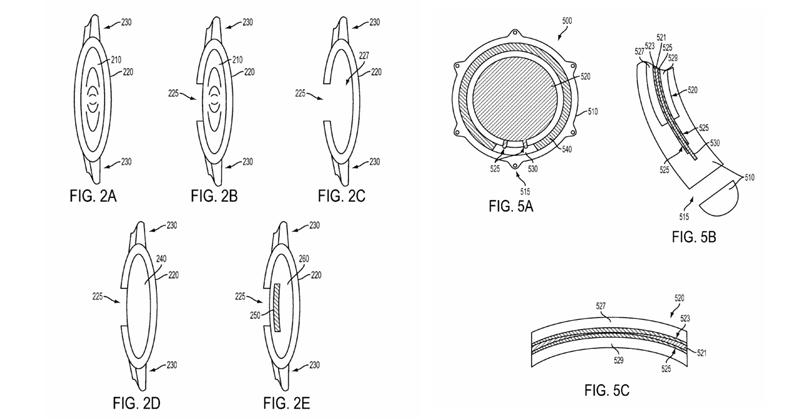 The Patent Application continues, saying, “The optical power of the natural lens of the eye can be controlled (e.g., by ciliary muscles of the eye) to allow objects at different distances to be in focus at different points in time (a process known as accommodation).”

This device is meant to operate in the following way – possibly – “Such an intra-ocular device could include an electronic lens that can be controlled to provide an optical power (e.g., a degree of focusing of light, such as may be measured in diopters) within a range of optical powers.”

NOTE: To be entirely clear, there is no mention of what Operating System this device would use. Based on our knowledge of Google devices like Google Glass, we’re making an educated guess at it being Android.