The Android App Player for the BlackBerry PlayBook is a big part of its future. Being able to access many of the 250,000 Android apps available was a large selling point for the PlayBook. It appears you lucky PlayBook owners can get your hands on the App Player early because a few prying eyes over at N4BB found a pre-release version of the app emulator — good news indeed!

Update: After reaching out to our contacts regarding the leak RIM has replied and as a courtesy we have removed the download link. This is what RIM had to say:

An older version of the Android App Player beta software for the BlackBerry PlayBook was inadvertently posted and has since been removed. We recommend that users refrain from downloading and installing this software since it is outdated and non-functional in many respects. The official beta release of the Android App Player for the BlackBerry PlayBook is on track for release later this summer.”

This version is based around Android 2.3.3 so it wont work with the select android 3.0+ Honeycomb apps available, while that list is still not that large it would be nice to take advantage of those apps but I’m sure that will come at a later date. Lucky for you PlayBook owners this was found hiding in an update. Reports suggest it’s a huge file, lags a bit, and doesn’t have a dedicated back button but I’m sure users can figure it out — swipe left or right to go back. 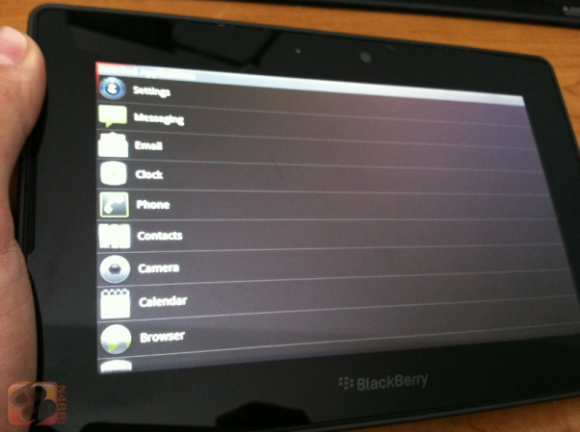 We are hearing this is a rather old build so don’t go in expecting anything polished and amazing just yet. Hopefully we get a final version sometime soon as the PlayBook has been out long enough. It should have more user interface elements as well as more features when it finally launches.

For all the details and countless download mirrors check out the via below. You’ll have to side-load the .bar file to install and use the App Player. A quick Google search for DDPB installer will show you how to side-load easily. Feel free to head over and read our full BlackBerry PlayBook Review.