Android 6.0 apps can ask permissions only when needed

At first glance, Android 6.0, now known as Marshmallow, isn’t as big a change as Lollipop was, but lurking under the hood is a change that could potentially break apps whose devs haven’t checked for compatibility. Google has somewhat revamped the App Permissions system in Android Marshmallow and has now revealed another big change to it. Apps can now just ask users’ permissions for a certain feature the very moment the app is about to use it, rather than asking for all permissions when the app is being installed.

In the past, or still in the present unless the developers have chosen otherwise, Android asks permissions for using certain platform features, like access to contact, sending messages, or connecting to the Internet, when the user installs an app. This is presented as a list of features that the user has to accept all of them before he or she can proceed with the installation. 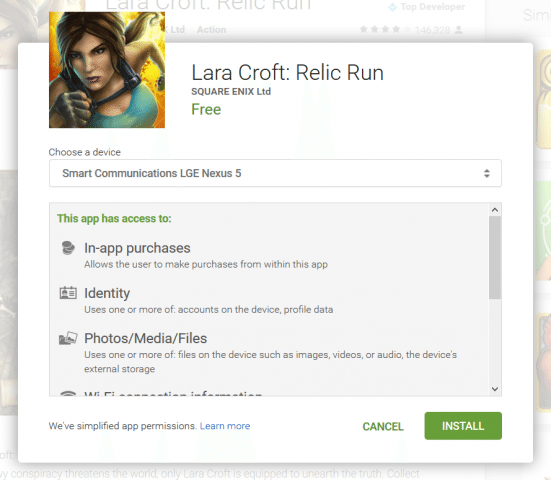 Android Marshmallow changes this system in two major and related ways. The first is something we’ve already covered before. Users can now switch certain permissions on or off on a per permission basis. Don’t want your messaging app to access your location? Turn that off in the new Settings page. That, however, presumes that the user is aware of such permissions being granted, which presumes the user even read the potentially long list before installing the app in the first place. 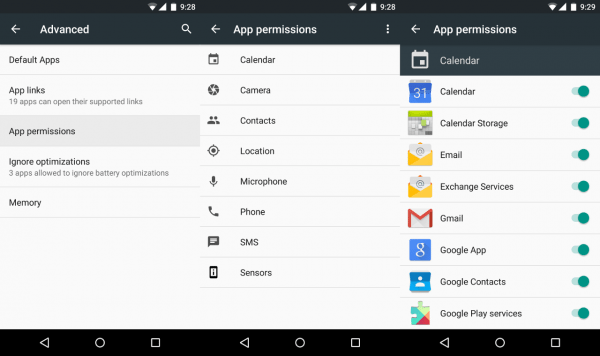 Google now remedies that second problem with the new Runtime Permissions. Users will no longer have to accept a long list of permissions when installing the app. Instead, the app will ask permission for a certain feature only when it is going to be used, either when the app is first launched after installation or immediately before the exact feature is used. This system is probably already familiar to iOS users. 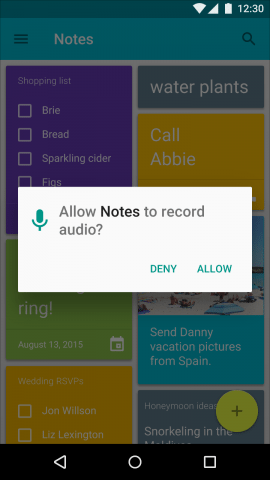 This new capability has benefits but also potential dangers. It is a better system to educate users about the permissions that are going to be used as they happen as well as what features they can turn of later in Settings. It gives users a better context on what the permission is going to be used for. It’s also more convenient as it removes one extra step from installing an app. However, given how users sometimes just tap through wizards and the like, there is still a chance that users miss important information. Second, developers need not be more upfront about the permissions of their apps. Of course, the app entries on Google Play Store still lists them in full, but that is a long scroll and a tap away, which similarly bears the danger of being ignored.