Presently, those who aren’t keen on Android‘s Messaging app have a variety of different options to choose from via the Play Store, some that function better than others. One of the reasons some apps have their share of issues is because of how the developers have to go about creating them — with hidden APIs, something that will come to an end with the arrival of Android 4.4 KitKat.

Over on the Android Developers blogspot, developers have been given details on how to prepare their SMS apps for the next iteration of Android. Existing APIs become public with Android 4.4, eliminating the need to use hidden APIs, and a default SMS app option has been added to the system, allowing the user to choose their preferred client. 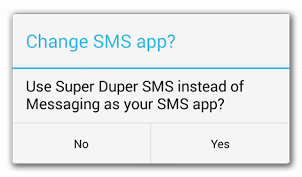 You can see what the menu and confirmation dialogue look like via the screenshots above. According to the write up of changes that developers will have to make, third-party SMS apps have to provide users with a message providing a way to switch the system’s default messaging app. While there are a fair bit of changes that take place behind the scenes, users will see simple changes and better app stability.

The changes will also affect apps that backup and restore SMS messages, with Android Developers saying presently that restoration won’t work on KitKat. The backup app would also have to be the primary SMS app under the required changes, so users of such offerings will likely see changes where the app has to be temporarily switched to default when used.