Google has added offline voice typing to Android 4.1 Jelly Bean, making the voice dictation system work even when your phone lacks a data connection. The company’s engineers had to shrink down the voice recognition engine significantly to make the system fit locally onto a phone, Google explained at IO today, meaning users will now no longer have to make sure they have a speedy data connection in order to take advantage of it.

In the on-stage demonstration, Google showed how a Galaxy Nexus running the new offline voice typing system in Jelly Bean could track a full sentence, transcribing it in seconds. In contrast, Apple’s voice recognition system in iOS – currently available on the iPhone 4S and new iPad – demands a web connection for the company’s servers to do the heavy crunching. 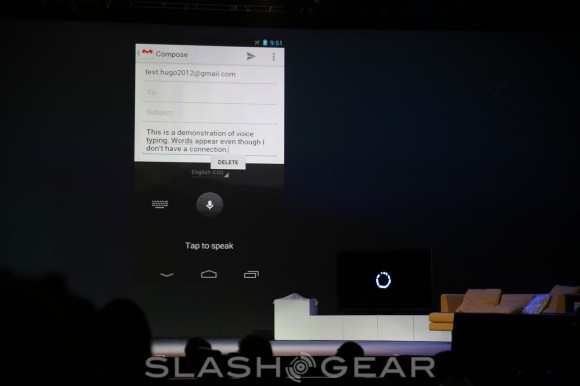