Streaming video on demand (sVoD) services will dominate pay-TV services by the end of 2020 in more than 30 countries, according to a new report published by Ampere Analysis. The United States was the first company to see streaming service subscriptions overtake pay-TV subscriptions; this milestone was reached in 2016. The number of countries with more sVoD than pay-TV subscriptions has increased substantially each year since and will likely skyrocket in 2020.

According to Ampere Analysis, more than 30 countries will likely have more streaming video on demand subscriptions than pay-TV subscriptions by the end of the year. This would follow another record uptick in country numbers last year. According to the firm, the big increase in country numbers from 2018 to 2019 was largely fueled by the launch of Apple TV+ in late 2019. 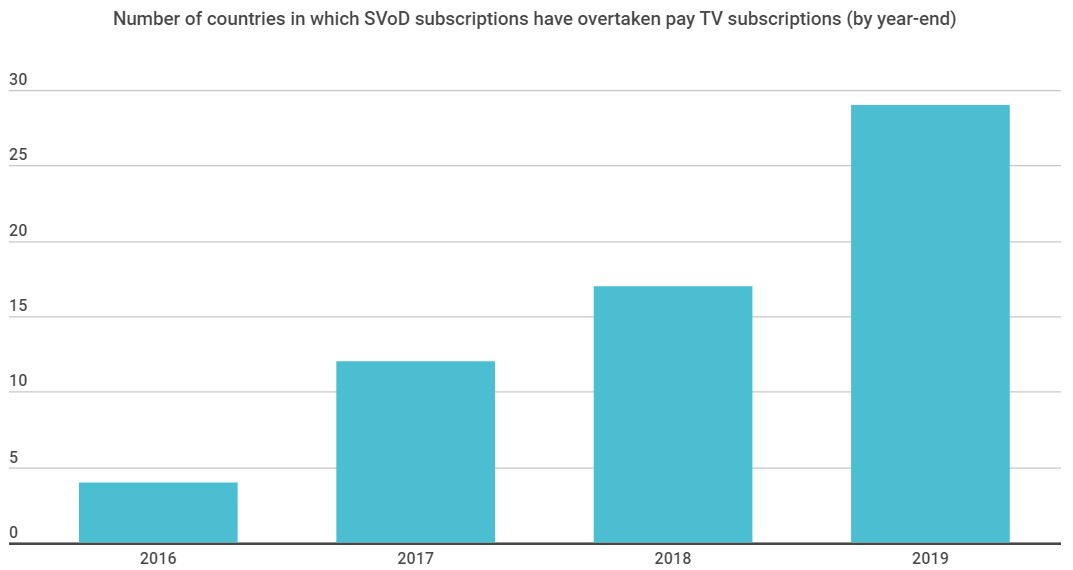 Streaming video-on-demand services are exactly what they sound like: services like Netflix, Hulu, and Prime Video. These platforms offer videos that the user can choose to start streaming at any time they want, which is distinctly different than over-the-top services, which provide live TV over the Internet.

Compared to 2018, another dozen countries saw SVOD video subscriptions overtake pay-TV subscriptions in 2019 — the final total for the year was 29 countries. In all likelihood, more than 30 countries will reach this milestone by the end of the year, marking an important turning point for the entertainment market.

Consumers are increasingly turning to their mobile devices and online streaming services for the majority of their video and music entertainment. Traditional pay-TV services are less appealing than ever, often coming with equipment fee charges, contracts, and channel bundles that can drive up costs. OTT and on-demand streaming services are cheaper in comparison, offering immediate access across many types of devices without contracts or special equipment.