If you know someone who loves Among Us and you’re looking FAR in advance for the perfect holiday gift this year, InnerSloth has your back. They’ve created several versions of the game Among Us with discs and physical boxes and everything that’ll make the entire situation a much more physically gift-friendly experience. The products are called “Among Us – Ejected Edition”, “Among Us – Imposter Edition”, and “Among Us – Crewmate Edition.”

The most expensive of the packages is “Among Us – Ejected Edition.” This version is available in four different sorts – PS4, PS5, Xbox One, and Nintendo Switch. This version includes a bunch of gear from designer Hannako Lambert, including: Crewmate fleece blanket, Red Imposter beanie, “1 of 12 special Mira HQ Holographic Access Cards”, Crewmate vs Imposter lanyard, Purple Crewmate with Crown plush, and retail exclusive steelbook (to hold the Among Us base game disk (plus DLC). 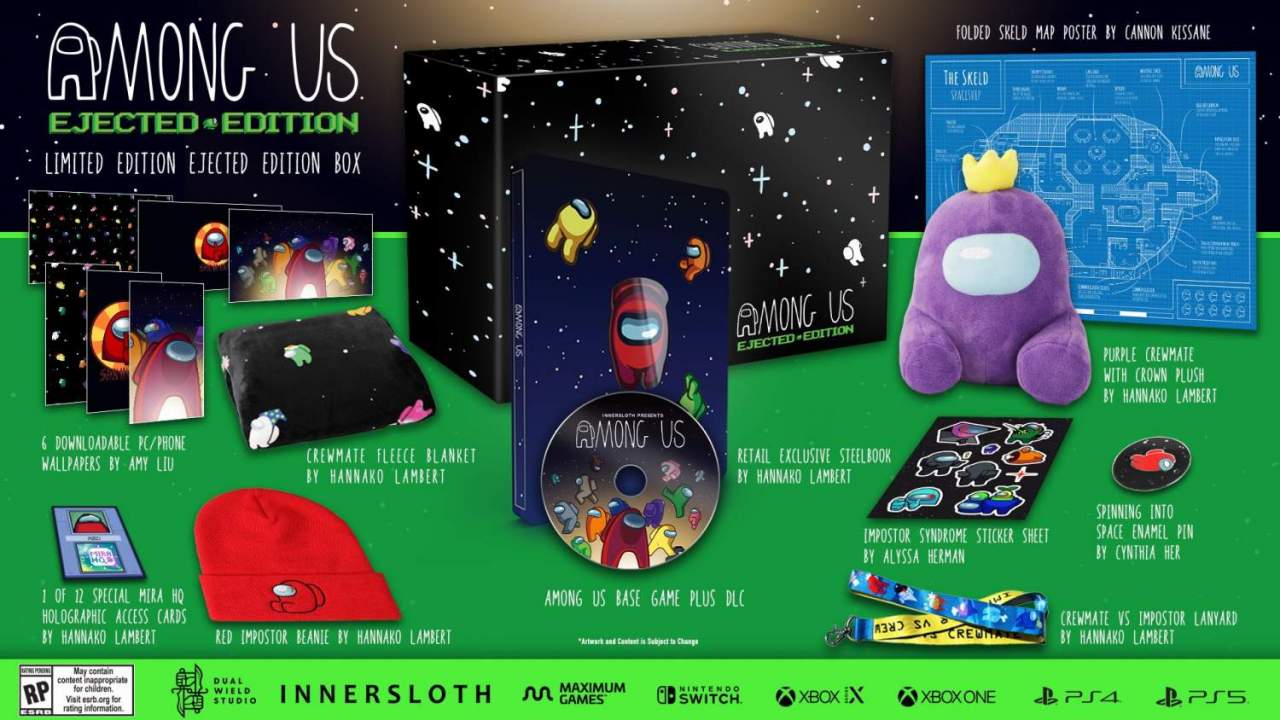 The Imposter Edition has just SOME of the stuff included with the more expensive package. Here you get the wallpapers, the holographic access card, enamel pin, lanyard, Purple Crewmate with Crown plush, Imposter Syndrome sticker sheet, and Folded Skeld Map Poster. You’ll also get the Among Us base game plus DLC, but this time in a 3D lenticular case as designed by Hannako Lambert, and it’ll all cost you around $50 USD.

The most basic packaged version will cost you $30 – that’s for the Among Us – Crewmate Edition. This version of the game includes the holographic access card, the Folded Skeld Map Poster, the wallpapers, the sticker sheet, and the Among Us base game with DLC and 3D lenticular case.

All of these versions of Among Us appeared in imagery at the Maximum Games store this week. The expected Release Date for these Among Us physical editions is fairly unfortunate, if you’re the sort of person that gives gifts to friends and family before the end of the year – December 31, 2021.

The good news there is THAT date generally indicates that the release date isn’t 100% set just yet – it’s just an indicator that we’ll see the release happen before the end of the year. It might be earlier, it might be later – we’ll just have to wait and see!