Back at Computex in June, AMD made a whopper of an announcement by revealing its second generation Ryzen Threadripper CPU, the 32-core TR 2990WX. In a way, the announcement of this CPU overshadowed Intel’s incoming 28-core processor, which was also revealed at Computex. AMD’s monster of a CPU is up for pre-order beginning today, and it isn’t launching alone.

There are three other CPUs that comprise Threadripper’s second generation line up. The 2990WX is unquestionably the top dog in this collection – and perhaps the most powerful desktop CPU created thus far – but the other three are capable in their own right. The rest of the line includes the 12-core TR 2920X, the 16-core TR 2950X, and the 24-core TR 2970WX.

As you can tell by the model names, there’s clearly a distinction to be made between these CPUs. The less-powerful CPUs in the X series are being targeted at gamers, while the WX series is intended for workstations and content creators. In other words, you can probably go for something like the 2920X if you’re going to use your desktop primarily for gaming, but those who do a lot of 3D rendering or similarly graphics-intensive work will want to consider the 2970WX or the 2990WX. 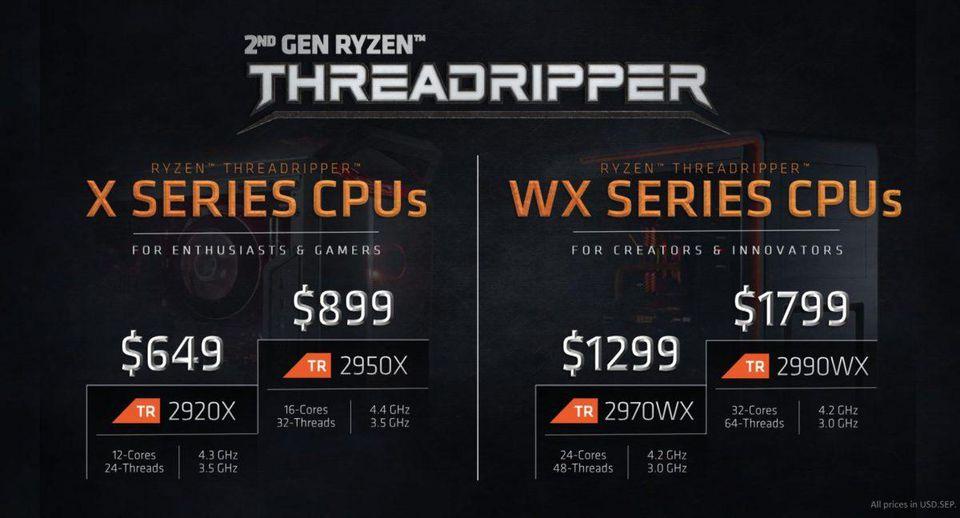 The 2990WX managed to set the highest-ever Cinebench score for multi-threaded, single-socket CPUs, which is a pretty big win for AMD, but it’s worth pointing out that it was also overclocked to 5.1GHz while its standard boost frequency tops out at 4.2GHz. In other words, unless you have a serious cooling set up, you’re probably not going to hit that clock speed. Still, it’s pretty clear that the 2990WX is going to be quite the computing beast even if its record Cinebench scores were achieved in a system that most end-users won’t have access to.