AMD made a variety of announcements during CES 2019, but perhaps the most exciting one was that of the Radeon VII. The new GPU, which is built using a 7nm process, is AMD’s answer to NVIDIA’s RTX 2080, but of course, most of what we know is limited to what AMD has told us so far. When the card was first announced, AMD actually listed benchmarks obtained from 25 different games, but they were doing a bit of hiding in AMD’s announcement.

Instead of putting these benchmarks front and center, the company actually put them in the footnotes of a press release for the Radeon VII. That means they weren’t detected right away, but now that they’ve been discovered, we’re getting a better idea of how the Radeon VII might perform when it starts shipping out to consumers next month.

Credit for the discovery of these hidden benchmarks goes to HardOCP, which also arranged the stats into a much more readable table. As you can see in the image below, AMD’s internal benchmarks only compare it to the Vega 64 when playing games in 4K and at max settings, so there’s no head-to-head with NVIDIA’s RTX cards just yet. Still, the benchmarks AMD published back up the company’s claim that the Radeon VII is 25% more powerful than the Vega 64. 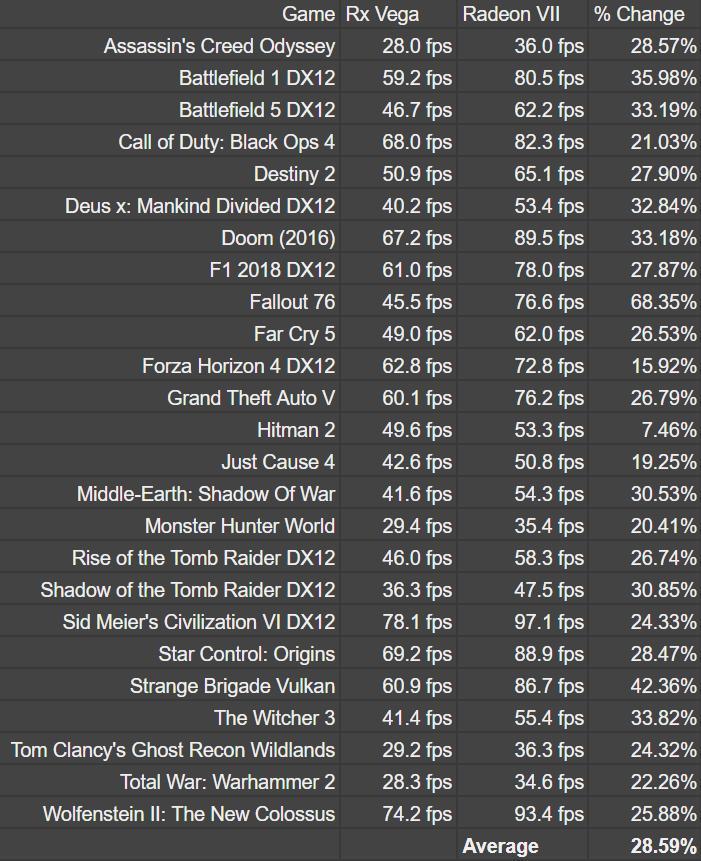 Though the average of these 25 benchmarks comes in at 28.59%, there are of course some outliers. In Fallout 76, for instance, the Radeon VII performs 68.35% better than the Vega 64, while in Hitman 2, the increase in capability only comes out to 7.46%. Those are the extremes, though, and most of the benchmarks show a 20-30% increase in performance.

Obviously, manufacturer benchmarks never really go into the detail we actually want. AMD doesn’t describe the full rigs it used to test these graphics cards, only saying that they were performed in a PC with an Intel i7 7700K, 16GB of RAM, and Windows 10. Both graphics cards were also on the same AMD drivers, but the company didn’t reveal much else about its testing rigs.

So, while this gives us a decent idea of how the Radeon VII performs compared to the Vega 64, most of us will probably want to wait to buy until the GPU goes through some real-world testing. It won’t be much longer until those other benchmarks begin surfacing, as the Radeon VII is scheduled to launch on February 7. When it arrives, it’ll be sporting a $699 price tag, which will put some pressure on NVIDIA’s $799 RTX 2080.