One of the best ways that scientists can discover small fossilized insects and plants is encased within amber. Amber can save the specimen just as it was the day it stepped into the gooey medium. A new research study has been published focusing on an interesting discovery of a fossilized ant with a new genus and species of fungal parasite growing out of it.

The chunk of amber has an ant inside that has a mushroom growing out of its body. The discovery has been named Allocordyceps baltica by the team who found it. It’s a new type of Ascomycota fungi attached to the ant, which were both preserved in amber 50 million years ago. The insect and its parasite were discovered in the Baltic region of Europe.

Ants are known to be afflicted with some strange parasites, some of which can change the insect’s behavior to benefit the parasite’s development and dispersion. Carpenter ants are particularly susceptible to fungal pathogens from the genus Ophiocordyceps. The new fungal genus and species shares some features with Ophiocordyceps but also shows developmental stages previously unknown.

Researchers can see large, orange, cup-shaped ascoma with developing flask-shaped structures that release spores known as perithecia. The fungus’ perithecia protrudes from the rectum of the ant while the vegetative part of the fungus is coming out of the abdomen and base of the neck. 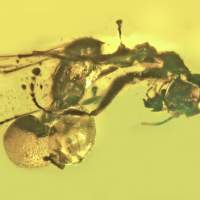 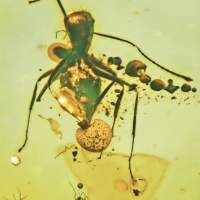 Researchers also see what appear to be sacs where spores for the fungus would develop. There are also some freestanding fungal bodies featuring what appear to be perithecia. All stages, including the freestanding ones and those attached to the ant, are the same species. One interesting discovery about this particular fossil is that the first fossil record that shows a member of the Hypocreales order emerging from the body of an ant.