It’s that time again, the “Amazon Prime Day” sale, the (two days) of the year when Amazon suggests it has its best deals of the year. Amazon will re-organize its front page to promote the products that companies agreed to push, and Amazon makes a boat-load of money. They’ll use every trick in the book to make it seem like you’re not only getting a deal, you’re having fun at the same time!

In terms of instant value to the end consumer, Amazon Prime Day 2019 is no different from the several Prime Day events that’ve come before. No matter the day, no matter the amount of ZAZZ the company showers upon you, Amazon is a store. Amazon is not in the business of losing money.

The tricks Amazon uses to sell items on Amazon Prime Day are simple. They work extraordinarily well – so well, it’s a shock that the company doesn’t have several Prime Day events throughout the year. Come back in a few years, once Amazon has automated their entire process, and we’ll see.

To combat the tricksy effects of Amazon Prime Day on your mind, let’s try to simplify the methods.

Amazon makes the rules, but also attempts to share the rules with you as if they weren’t the ones who made said rules in the first place. They’ll say, look, this item will go on sale at 5-o’clock, you’d better hurry!

But there’s no reason why that sale couldn’t have started earlier, or later. Amazon also sets countdown clocks on sales to make it seem like, maybe, at the end of the countdown, all the products left without purchase will cease to exist. 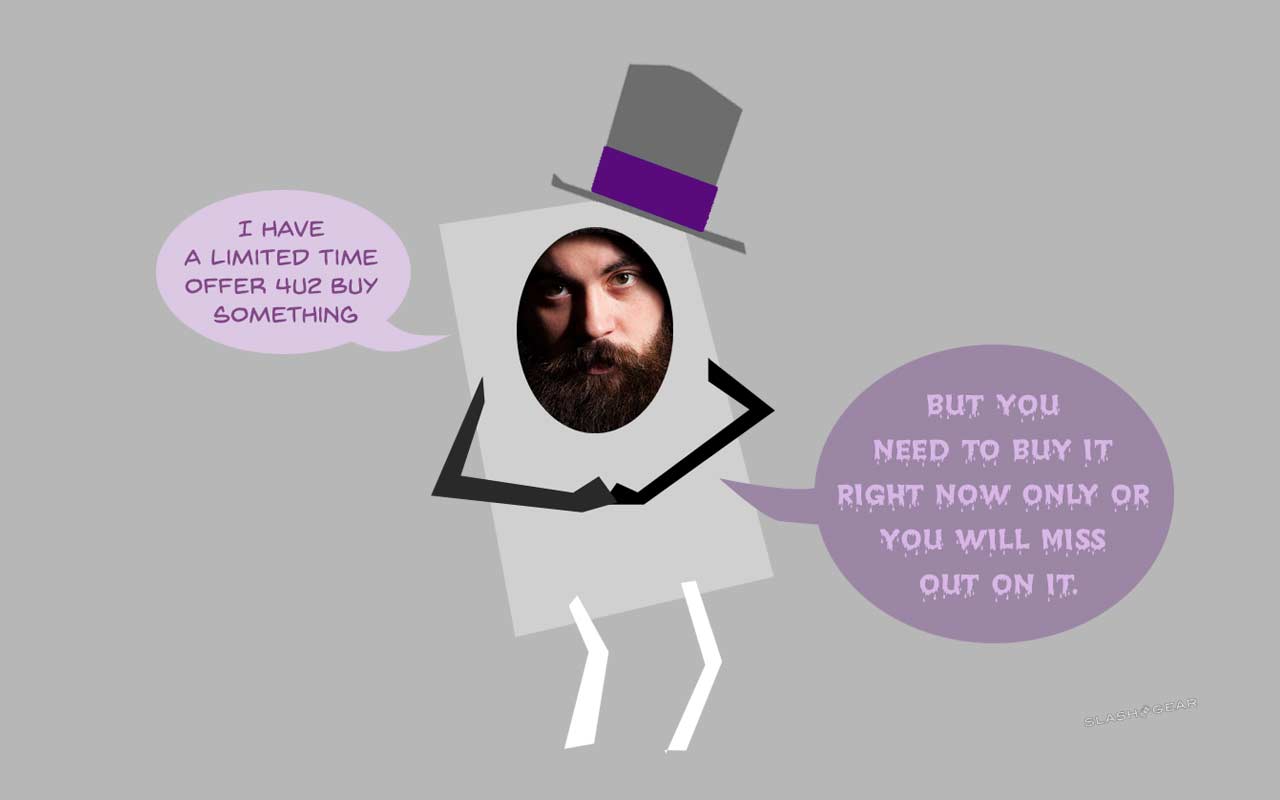 2. Deals are an illusion

Amazon and retailers working with Amazon will not be selling products on Prime Day at prices that will change your life. They’re here to make money, the same as any other day of the year.

Several tactics are used to keep your attention and trick you into feeling exhilarated by spending money on Prime Day. They’ve used all of these tactics more than a couple times before.

Amazon Prime Day Tricks/Tactics:
1. Countdown Clocks: Oh no, hurry!
2. Prime Day Exclusives: As if this product will never exist outside of Prime Day.*
3. Limited Editions: Much like the “exclusive”, Amazon wants to you believe that you might never see this product again, because supply might run dry!
4. Product Limits: Limits on products available, limits on products available for a certain price, any sort of limit that’s put in place specifically to push a consumer into believing that it’s in their interest to purchase that product because, otherwise, that product will become unattainable to them (when that’s simply not true).
5. Amazon Credits: You give us money, we give you “money”.

Watch out for this whole credit-based business. It is only a way to keep your eyes in Amazon’s store and out of any other store in the world – because you’ve got money here, right? This also works wonders with the idea of buying gift cards for actual gifts – because either the card makes the person spend more than the card is worth, or they spend less, and the company keeps the difference.

* If a product was high quality enough to sell on any other day, why would Amazon choose to sell it ONLY on Prime Day? Just think to yourself: Would I buy this same product if I saw it any other day of the year?

This could have been part of the Tricks list above, but I find it dishonest enough to deserve its own larger spot in this guide. The idea that you might “unlock” anything is impetus enough to convince almost anyone of almost anything.

The most enticing way to get any person to do anything on the internet is to promise them that they’ll gain access to something they did not have before. Now imagine that what you’ve gained access to is another doorway. These doorways lead to one destination: A pile of products you didn’t realize you needed, that’ll sit in a pile until you remember you’ve bought them, at which point they’ll have long-since become useless to your everyday life.

This ALL boils down to emotions. People tend to splurge on purchases when they’re happy, when they’re excited, when they’re on the verge of that next dosage of dopamine. That’s the chemical that gets released in your brain when you’re edging towards a satisfying goal, and immediately after that goal is reached.

The time each year retailers make the most sales is around the holiday season – other major holidays hit that key combination of excitement and often times nostalgia – so that you’ll feel like it’s ok to Treat Yo’self, if you know what I mean.

5. The ONE way to find value in Prime Day

If you head into Amazon Prime day, and you already had an Amazon Prime subscription, and you’ve made a list of all your needs before Prime Day arrives – THEN, you might get a deal. Only THEN, when you know what you’ll probably buy one way or the other, and only then, will you possibly find a product that’s less money than you’d otherwise spend.

And even then, there are “deals” on Amazon Prime day where the price of the item isn’t significantly lower than you’d find anywhere else. Make sure that you take the couple minutes necessary to compare the price of the sale item to other items for sale on the internet at that same moment, BEFORE purchase.

If you keep your head about you, and keep your “I’d have purchased this anyway” list nearby, you’ll survive Amazon Prime Day without emptying your wallet on things you do not need. 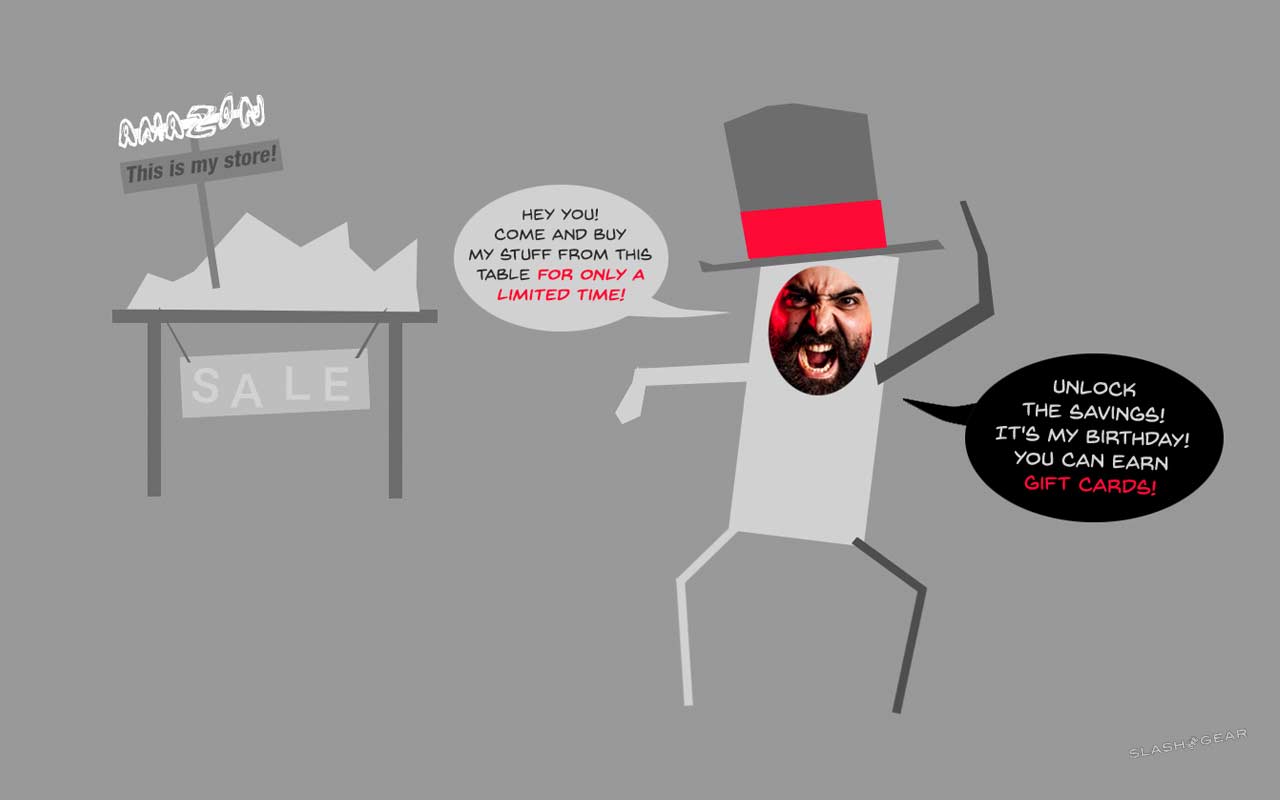 6. My best advice to you

My never-fails advice for shopping in ANY situation is as follows. Consider yourself in an alternate situation. In the case I’ve chosen above, Amazon is a person who has a table full of products at a flea market.

Now, Amazon will try to sell things to me at this flea market like any good marketer would. But we’re not in a store, we’re not online. The same tricks no longer really apply, and they shouldn’t really work.

Imagine if someone at a garage sale (or boot sale, if you’re in the UK) said that it was their birthday, so they were having a limited-time-only sale on a brand new in-the-box smartphone. They suggest that the item has JUST gone on sale right now, and that if you buy the phone (for a one-time-only sale of 15% off the normal price), you also unlock the ability to get a 5% discount on a new set of socks!

If someone said all of that to me at a flea market, or a garage sale, etcetera, I’d think “who does this guy think he is? We’re not at a store. Just tell me the price at which you’d be willing to part with the product, and that’ll be the end of it.” That, or I’d think the guy running the sale stand was crazy, and just walk away.

Why do we let businesses like Amazon hold so much command over our perceptions? For that matter, why do we fall for this “sale” nonsense at any store, ever? Keep your wits, stay alert, and don’t buy something just because it seems like Amazon wants to give you the opportunity to buy – that is an opportunity they need to attain from YOU.