Amazon has been testing its drone technology for a while now, and we’ve seen some demonstrations and patents related to this testing. The latest patent to surface details one method by which Amazon delivery drones may get packages directly to customers — via a parachute, allowing the package to be dropped from the sky. This would prevent the drone from having to land, though it would monitor the package’s descent before taking off.

The patent was recently granted to Amazon by the U.S. Patent and Trademark Office, and in it the company details ways its delivery drones may deliver packages. The first step, of course, is for the drone to be in flight with the package attached. It would then arrive at the delivery address, where it would pick a location to drop the package — your front yard, perhaps. 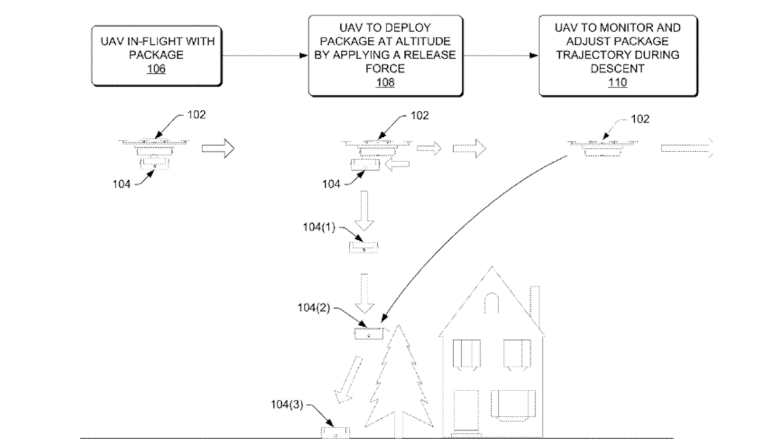 A falling package isn’t terribly appealing, of course, and there’s also the risk of it falling somewhere it shouldn’t. To address that, the patent details a way the drone would monitor the package, keeping an eye on it as it falls. If the drone detects a problem, it could then relay info to the package that would deploy necessary technologies to guide its path.

These technologies include a parachute on a particular side to alter the path, or deploying a landing flap that could similarly guide the package onto a better trajectory. There’s also a compressed air canister that could deploy to burst the package into a different direction. As with all patents, though, this technology may never actually find its way into a final product.