Amazon’s Prime Air delivery drones may have seemed like science-fiction but the retailer has already kicked off real-world trials – albeit with only two shoppers. Flights began on December 7th in the UK, with one of Amazon‘s drones flying completely autonomously from its distribution center to a customer’s home. The flight took thirteen minutes in total.

It’s the latest stage in what has turned into a fairly long roll-out for Amazon’s drone ambitions. That process has seen it bump heads with aircraft safety regulators in several countries, as it attempts to navigate its self-piloted drones through laws that are only now evolving to encompass such technology. In the US, for instance, Amazon still doesn’t have permission to fly drones out of line-of-sight and under their own control.

The UK testing is taking place in a rural area, reducing the potential for obstacles and other issues getting in the way. Amazon is permitted to fly within daylight hours, when wind speeds are low, and visibility is good. Rain, snow, or icy conditions will ground the drones, it says. 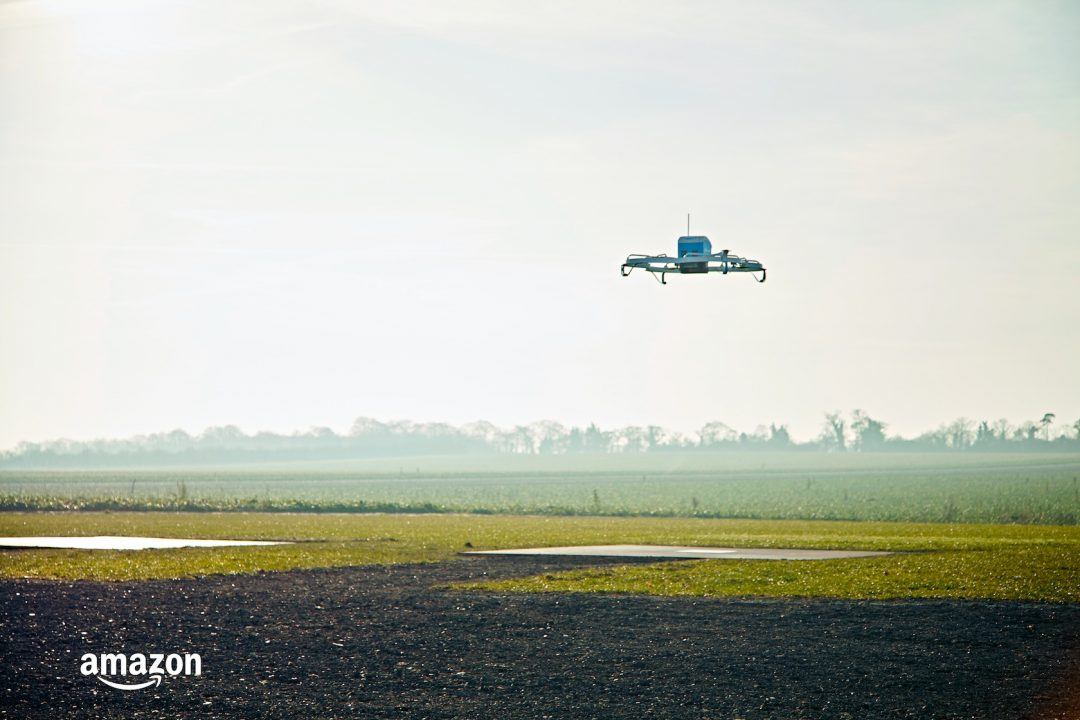 Permission was granted back in July by UK regulators, after the retailer ran its prototypes through several tests to demonstrate safety. Among the issues it needed to tackle were proving that a single operator could manage multiple autonomous drones, and that the UAVs themselves could identify and avoid obstacles.

According to Amazon’s video demo, the drone takes off, flies, and lands completely of its own accord. The recipient of the package needs to put out a landing mat, which the drone presumably uses computer vision to spot and aim for. Payload weights supported vary according to design, of course; this current prototype is a fairly traditional four-rotor quadcopter, able to handle up to five pounds in weight, though Amazon says it has multiple designs in testing. The first delivery was a Fire TV and a small bag of popcorn.

The plan is to expand the trial in the UK with more shoppers around the Cambridge area surrounding the first Prime Air center there. Assuming weather conditions are conducive – not always something you can count on in the UK – those taking part in the trial will be able to use it seven days a week. The goal is to make all deliveries within thirty minutes.

We’re still some way off from Prime Air becoming an option for most of Amazon’s customers. Unusually, while those in urban areas are usually the first to get expedited service – like same-day delivery – it may well be that the easier skies around rural locations make it more practical to build out service there instead. Amazon has Prime Air development centers in the United States, the United Kingdom, Austria and Israel, it says, with tests of a variety of complexities taking place in multiple locations around the world.