Amazon has given the shopping cart a high-tech makeover, with the new Amazon Dash Cart set to launch in its physical grocery stores. While it may look at first glance like a regular cart, the green and black upgrade allows for an instant checkout: in fact, once you’ve filled it up, you can just walk straight out to the car.

It relies on the same sort of computer vision and sensor systems that Amazon Go stores do. There, cameras monitoring shoppers can track what they pick up, subsequently put down again, or choose to purchase. As they leave the store, their Amazon accounts are automatically charged for what they took, without needing to come into contact with a regular cashier.

Amazon Dash Cart takes the same approach, but for larger quantities. Launching first at the Amazon grocery store in Woodland Hills, CA, when it rolls out later this year it will allow shoppers to simply fill up on products and then exit through the special Amazon Dash Cart lane. There, sensors identify the cart and the credit card saved to the Amazon account is charged.

When you get to the store, you scan a QR code in the Amazon app on the cart itself. The cart itself has a screen integrated above the handle, which can show the Alexa Shopping List for your account, and allow you to check off items as you find them. There’s also a running subtotal of what you’ve put into the cart, and a coupon scanner for applying any available discounts around the store. 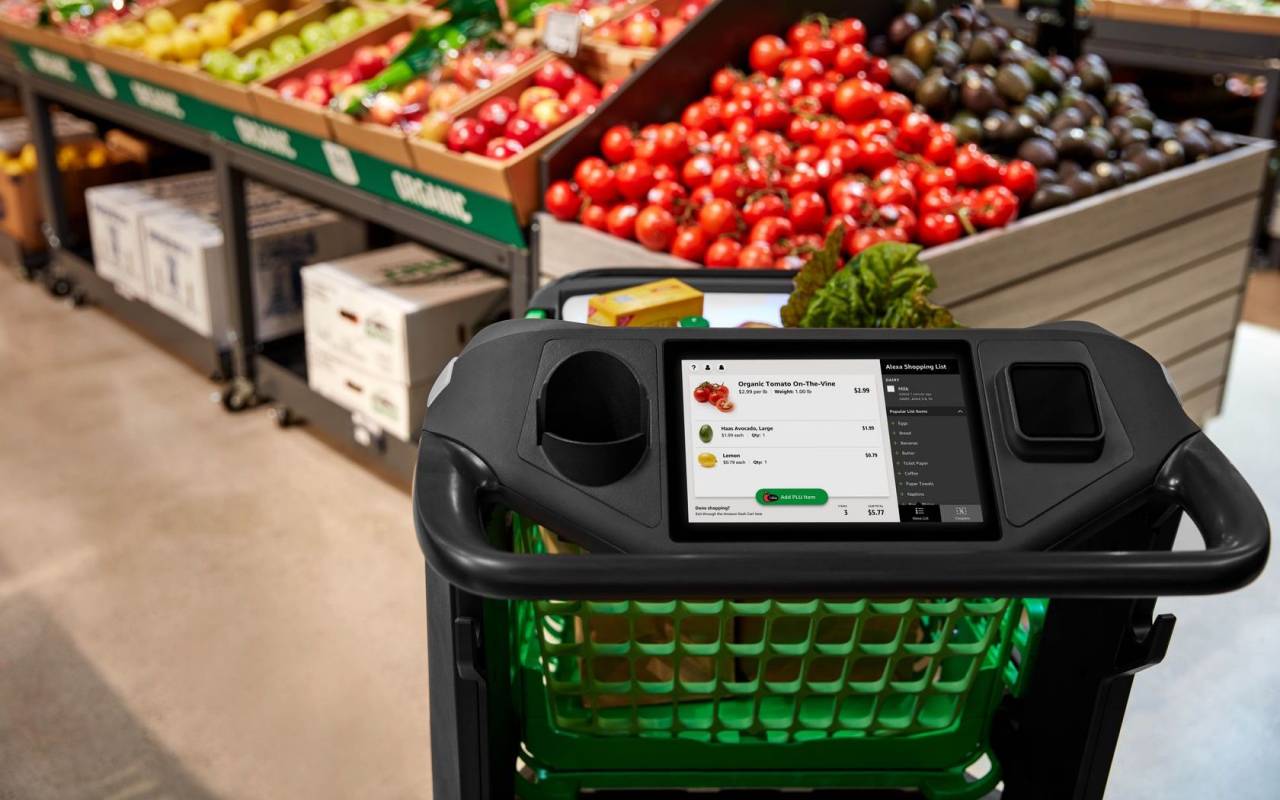 We’re not quite at the stage where you can throw in as much as you want, mind. The system “is specifically designed for small- to medium-sized grocery trips and fits two grocery bags,” Amazon says. Those two bags are placed in at the start. Orange lights flash if you put an item into the bags and it’s not properly identified; if an item has a PLU number – such as fresh produce – that can be entered using the touchscreen and the cart will weigh those items automatically.

While Amazon’s cashier-less stores seemed fairly gimmicky to begin with, their potential to reduce contact between shoppers and employees is seeming all the more sensible given the current health situation. However figuring out how to scale the system has been a challenge. Amazon Go stores are generally fairly compact, targeting smaller numbers of purchases in urban areas, such as the lunchtime crowd.

Outfitting a full-sized supermarket with the various sensors and cameras required for the Amazon Go experience could get complex and expensive, though. This new Amazon Dash Cart is an alternative to that, baking the smarts into the cart itself. It also means that stores using the system will also be able to cater to non-Amazon shoppers, who’ll be able to check out using the normal process.