Amazon is working on an anonymous mobile payments system, a new patent filing has revealed, using a Western Union style process of temporary identifiers which allows transactions without handing over your name, email address, or other personal details. The PayPal alternative uses an intermediary payments provider with which each individual in the deal is registered, but rather than sending money to a user’s email address, a special code is generated which can later be redeemed.

The patent, filed back in 2009, argues that many users prefer not to give out personally-identifiable details as a way of avoiding potential data theft or spamming. In contrast, Amazon’s system uses a series of temporary tokens that can be exchanged, either with the sender triggering the payment or the recipient requesting it, but with no exchange of personal information.

In practice, if you had to give a friend a payment of $20, you could send a text message to Amazon’s server with the text “PAY 20”. A return message would have a specially created code, tied to your account, which – when your friend texted it to Amazon from their phone – would credit their account with the appropriate amount. Amazon suggests that the code could contain part of the recipient’s phone number: not enough to identify them, but enough to ensure that it would be unlikely that someone else could use the code from their own phone. 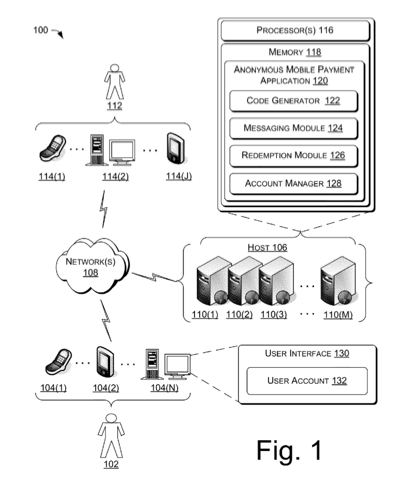 More complex versions of the system, meanwhile, would allow limitations to be placed on the temporary codes. For instance, Amazon describes how they could be set with expiration dates, so that recipients would have to use them before a certain periods; alternatively, a single code could be valid for multiple redemptions (potentially a limited number) such as to operate as an anonymous payment plan. Something other than money could be exchanged, too; Amazon suggests tokens, download credit, or other virtual currency.

Of course, any such system would require the intermediary infrastructure be set up, and enabled for accepting payments in multiple currencies across multiple locations. Amazon already has such a system, given its retail presence across the world, while its mobile ambitions have already been revealed in the form of the Kindle Fire range and the upcoming near-200 country expansion of the Amazon Appstore.