ALMA snaps most detailed view of monster starburst galaxy ever

Scientists have captured a new image of a monster galaxy that is 12.4 billion light-years away from our own galaxy. The image is the most detailed ever taken of this galaxy and was captured with the Atacama Large Millimeter/submillimeter Array (ALMA). Researchers using ALMA have revealed that the molecular clouds in the galaxy are highly unstable allowing runaway star formation.

This monster galaxy is believed to be the ancestor of the huge elliptical galaxies seen in the Universe today. The team says that the findings made using ALMA pave the way to understand the formation and evolution of this type of galaxy. The main image here is an artist’s representation of the monster galaxy in question. The second image is the actual image ALMA took. 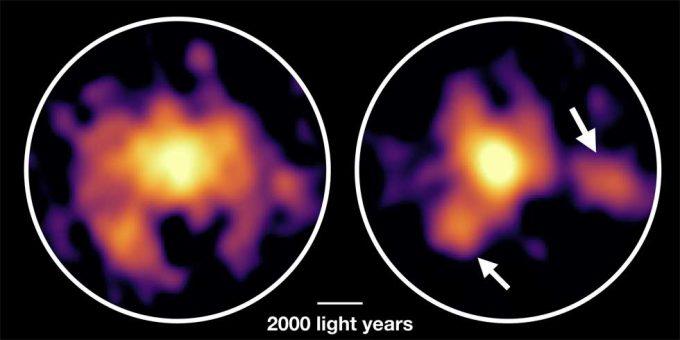 Monster galaxies are also known as starburst galaxies and they form stars at a pace 1000 times higher than stars form in our galaxy. Scientists are working to understand why starburst galaxies make stars at such a furious pace. The researchers targeted a chimerical galaxy dubbed COSMOS-AzTEC-1 that was discovered with the James Clerk Maxwell Telescope in Hawai’I and later with the LMT in Mexico.

Scientists say that they discovered an enormous amount of carbon monoxide gas in the galaxy. LMT observations allowed the scientists to measure the distance to the galaxy finding it was 12.4 billion light-years from us. That galaxy was rich in the ingredients needed to form stars and the team struggled to determine the nature of the cosmic gas within the galaxy.

ALMA’s high resolution and sensitivity was used to observe the galaxy and build a detailed map of the distribution and motion of the gas. The result is the highest resolution molecular gas map ever made. Off-center clouds of gas aren’t common for starburst galaxies, yet that is what this galaxy has. Two clouds of gas are separated by several thousand light-years of distance. Estimates are that all the gas in the galaxy will be consumed in about 100 million years.