Toyota has rolled out its all-new flagship sedan in Detroit in the form of the completely new 2019 Avalon. The car rolls on the Toyota New Global Architecture platform and uses a 3.5L V6 or Toyota Hybrid System powertrain. The car has standard Apple CarPlay, Dynamic Auxiliary Turn Signals, and Yamaha wood and aluminum cabin accents in some versions.

The car has standard Adaptive Variable Suspension and Toyota Safety Sense P. The new Avalon has a rear cabin that was extended by 7-inches compared to the outgoing model. Despite the extended rear cabin, the new car is slightly trimmed in outside dimensions overall. Different versions of the Avalon get slightly different exterior trim bits with the LED taillamps shared by all. The XLE and Limited versions get silver LED headlight bezels, body color mirror housings, and unique wheels.

The XSE and Touring versions have piano black mesh grilles and wheels in gloss black or machined finish. These versions also get a trunk spoiler and quad tailpipes. LED Vision Tech headlights are available on XLE and XSE grades have three reflectors for DRL, high-and low beams. Touring and Limited get Adaptive LED turning lamps. 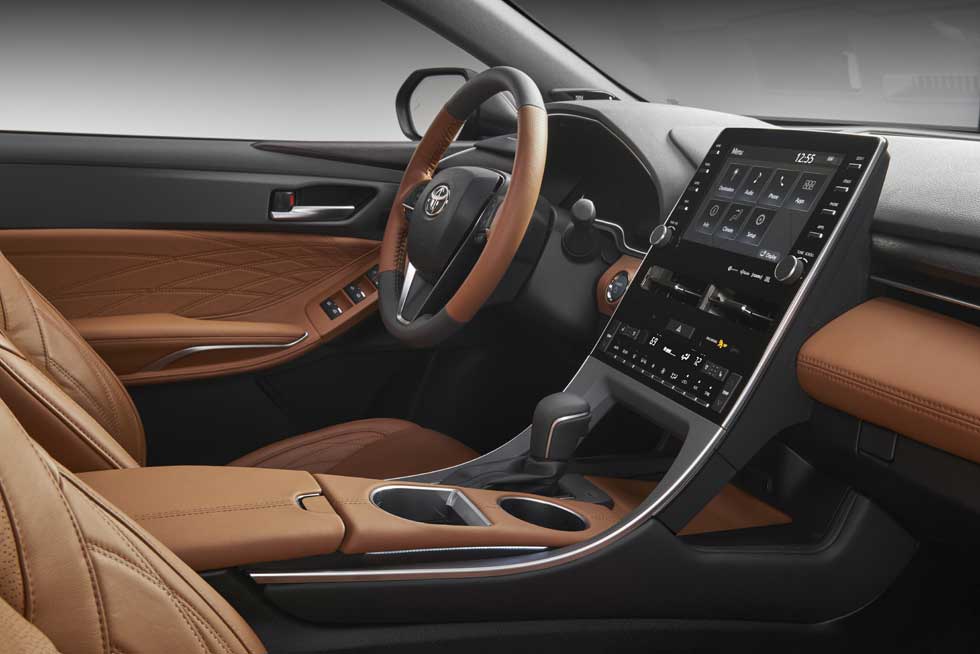 The interior gets lots of soft-touch materials, wood trim and Toyota says that the material differentiation between trim levels is minor. Engineered wood is used on XLE and Limited gets real wood. Toyota is offering Cognac colored leather seats along with beige and gray color options. XLE buyers can get black softex. All versions have a 9-inch multimedia system for audio and nav with JBL audio as an option.

Power is via a 3.5L V6 with hybrid versions getting a 2.5L Dynamic force 4-cylinder with a 650V electric motor and CVT. Toyota says the V6 makes more power and has better fuel economy than the outgoing model. Pricing and availability details aren’t offered at this time.