Is it evidence of alien life, or just wishful thinking? A scientist from NASA’s Marshall Space Flight Center thinks that it may be the former. Dr. Richard Hoover published a study in the Journal of Cosmology that examines possible microfossils inside of carbonaceous meteorites. But some scientists are skeptical that they may just be very old earth organisms.

Dr. Hoover used a Field Emission Scanning Electron Microscope to vies slices that he cut from Alais, Ivuna, and Orgueil CI1 type carbonaceous meteorites. The microfossils he found look similar to trichomic (with hair-like features on the surface) cyanobacteria and trichomic prokaryotes. He concluded that since the bacteria are inside the meteorites, they are not contaminants from Earth, but are from space, possibly from a comet, moon, or another planet.

The Journal of Cosmology has invited over 100 experts in the field, and over 5,000 scientists to review the paper and thoroughly vet the discovery. Dr. Hoover, who is the Astrobiology Group Leader at NASA’s Marshall Space Flight Center has previously conducted research on meteorites from Antarctica and studied bacteria from around the world. He ran various tests on the fossils to prove that they are biological life. A number of them are similar to those found on Earth, but they are not exactly the same. For comparison below are two pictures, the first is from the Ivuna CI1 meteorite, and the second is the bacterium Titanospirillum velox from Earth: 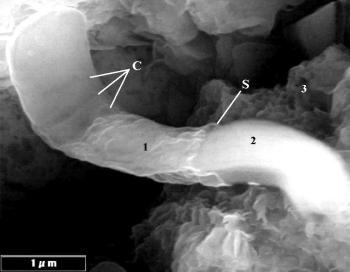 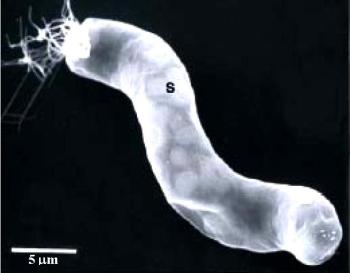 The form looks pretty similar. But the directory of NASA’s Astrobiology Institue, Carl Pilcher, has his doubts. The meteorites in question fell to earth around 100 to 200 years ago, and Pilcher thinks the simplest explanation is that the microbes are Earth microbes that found their way into the meteorites. And Paul Hertz, the chief scientist of NASA’s Science Mission Directorate in Washington, issued a statement saying that NASA does not support Hoover’s findings.

We will have to await further review to see if this is really a staggering discovery, or just overblown.

The original study in the Journal of Cosmology is here.
[via PC World]