We’ve not heard much from Albatron since their Tee PC touchscreen slate cleared the FCC back in December, but the company has obviously been busy in the meantime.  The first live photo of Albatron’s netbook has emerged, over at Netbooknews.de, and while specifications are currently unknown it’s certainly shaping up to be a temptingly thin ultraportable.

In fact all we really know right now is that the Albatron netbook has a 10.2-inch display and weighs around 1kg, which even in netbook circles is an impressive feat.  Confirmed ports are audio in/out and a memory card reader; the gold port in the hinge looks to be the power connector (you can see it more clearly in this larger version of the image).

Sascha from the site is promising more details, together with photos and video, very soon.  It seems to be the same device as he’s holding in this picture (from his Twitpics stream): 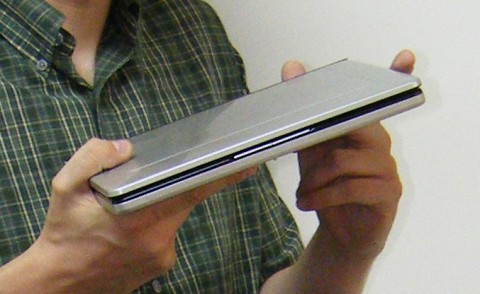