The anticipated remaster of 2010’s hit Alan Wake has arrived and it brings with it a 4K version of the story many played years ago, offering the opportunity to experience the classic survival horror title on the latest gaming hardware (including the PlayStation this time around). Enough time has passed between the game’s original launch and the arrival of Remedy’s remastered version to usher in a new generation of players, ones who are entirely new to the Wake universe and the strange horror he has found himself trapped within.

The story: Horror, survival, and the supernatural

Note: This review avoids story spoilers, but if you want to experience the game from as fresh of a standpoint as possible, skip ahead to the next section.

Whether you’re a fan back to re-experience the game with its newly bestowed near-cinematic quality or you’re playing the title for the first time, Alan Wake starts the same: you’re a horror writer on vacation with your wife Alice when, at nearly breakneck speed, the seemingly ordinary (if not domestically turbulent) trip becomes a confusing mess of fugue states, mild traumatic brain injury, a manuscript that somehow ended up scattered throughout an entire forest, and an evil presence that is taking over bodies to hunt you in the darkness. 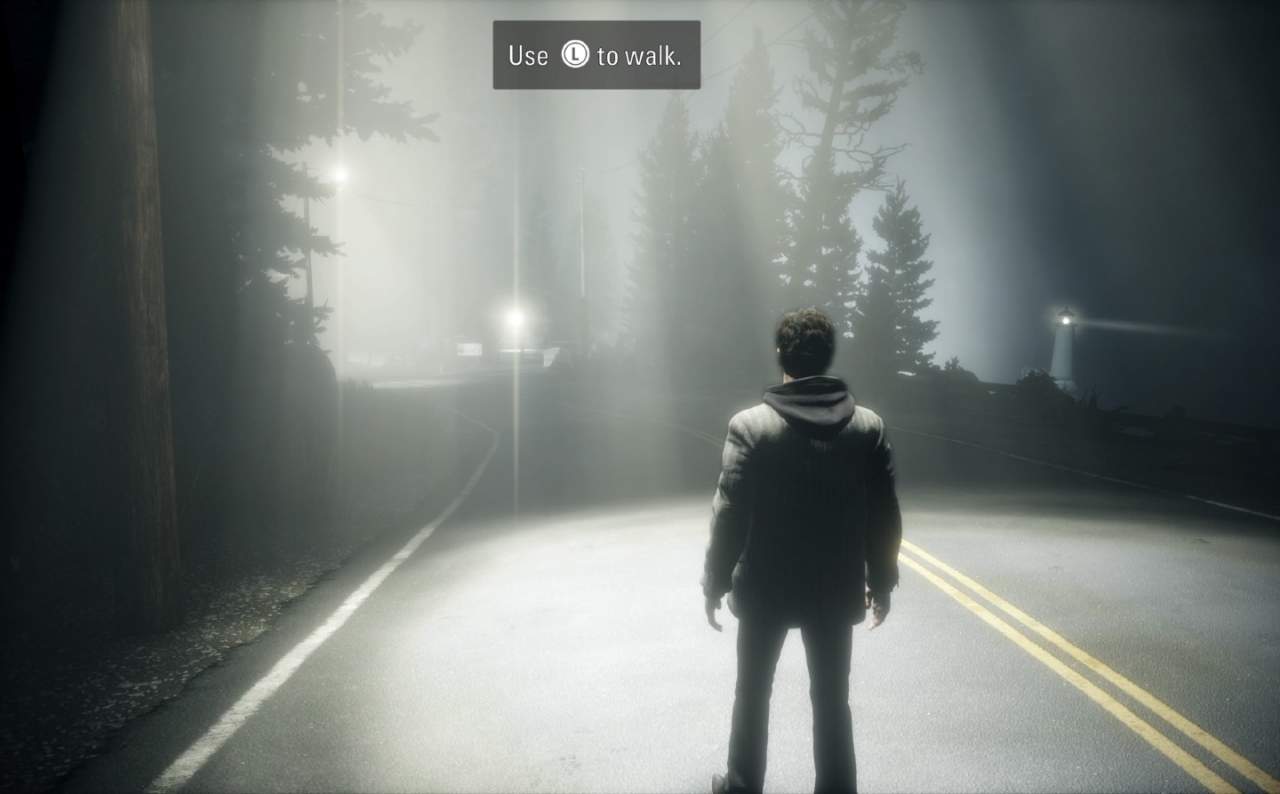 Alan Wake is more than a game about a horror writer — it is, in its own way, a horror novel played out in a visual format, not quite a movie and yet with cinematic cutscenes and distinct episodes that blur the line between interactive and passive entertainment. Each episode ends with the Alan Wake splash screen followed by the announcement that you completed the episode. Motivating music akin to what you’d hear during a TV show’s ending credits plays; if you allow the song to reach its end without skipping, you’ll be automatically presented with a recap of the previous episode before the next episode’s gameplay starts. 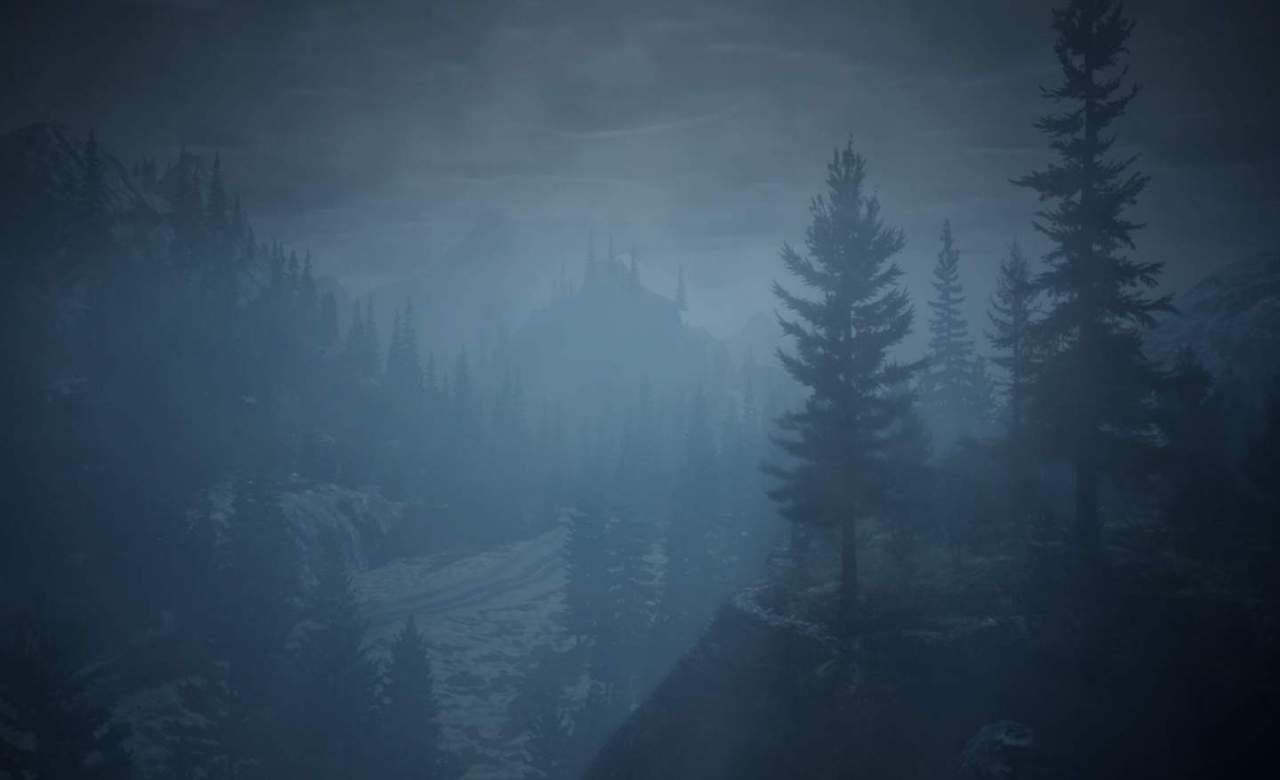 The rapid speed at which players get into the action comes with an uncomfortable side effect: you’re given good reasons to assume early on that Alan Wake, popular horror author, may be suffering from psychosis. You’re not alone in this assumption as Barry, Wake’s agent, exclaims as much in response to Wake’s frantic, seemingly crazed phone calls about an evil presence that is possessing people in the forest town of Bright Falls, Washington. Then buildings start exploding, Barry apologizes, and for a little while, you don’t feel quite as bad about shooting random people possessed by shadows.

The certainty felt about Wake’s mental state is short-lived, tossing players into what never feels quite real or fake. During intense encounters, dark shadowy figures coming out of the shadows, the surrounding environment takes on an almost etheric quality, plants dancing with soft, blurry veneers on a ground that isn’t quite foggy, yet somehow obscured from clear view. The atmospheric nature of these encounters, reminiscent of a psychedelic trip, only reinforces suspicions that maybe, just maybe, Alan Wake is losing his mind.

Soon enough, the player is back to believing that the events they find themselves in are really happening — that darkness has overtaken this idyllic forest town and one writer has found himself unwittingly recruited to fight it. And just as you, the player, grow comfortable with this belief, skepticism about the main character’s sanity barrels back around with the simplest of observations.

“There’s no reason for these work lights to be here,” Wake states at one point. “It’s almost as if they were left here for me to use.” Calls from Alice add to the skepticism with her lamenting that her husband isn’t himself anymore, almost making the players feel as if they’re being gaslit.

This maddening oscillation between, well, apparent madness that exists only in one writer’s head and a very real supernatural threat leaves the player feeling off-balance for much of the game, but in a good way. At times there’s a sense of near-guilt for shooting the ‘taken’ as you find yourself certain that Alan Wake is in need of medication, not a shotgun. At other times, you can’t get a hold of enough flashbangs to satisfy the overwhelming certainty that you’re fighting to save an island of people from a shadowy evil. 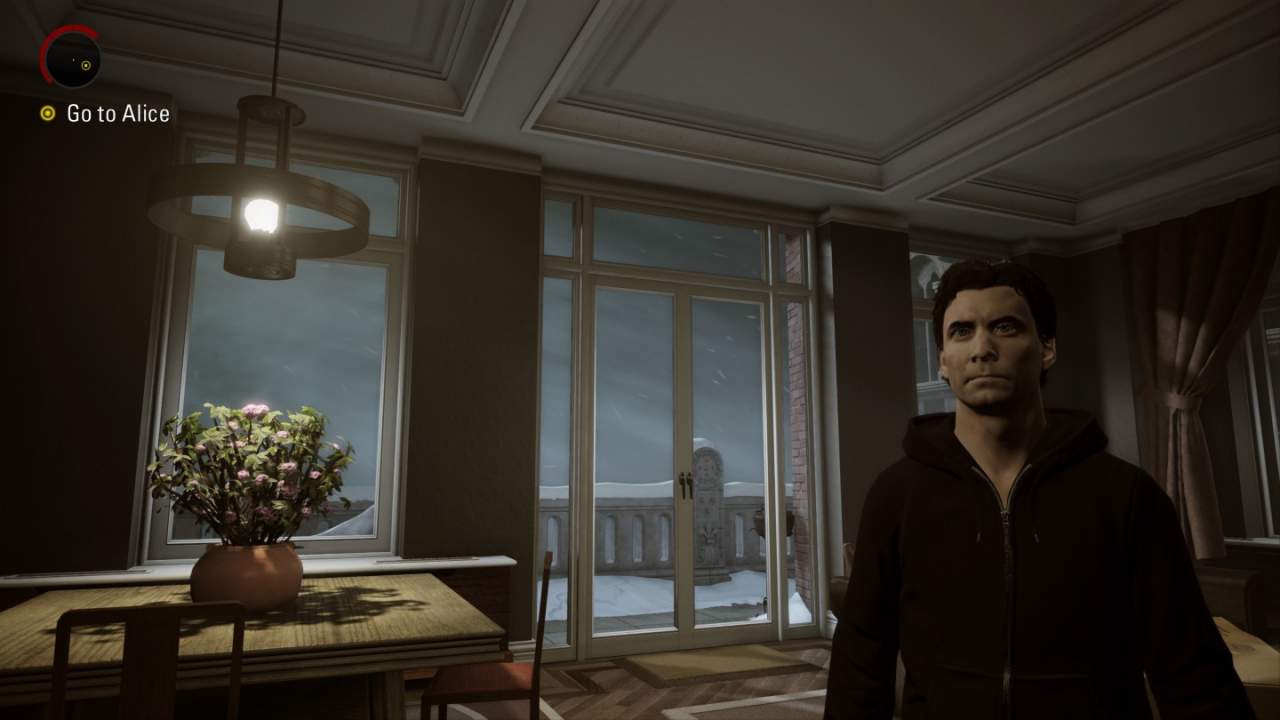 All the while, a mysterious manuscript looms in the back of your mind, missing pages scattered around the island in ways that don’t quite make sense, painting a mystery amplified every time you come across a TV playing black and white footage of your own previous work on the story. Manuscript pages picked up during gameplay can be read at any time, fleshing out the game’s story and shedding light on the things you’re experiencing. 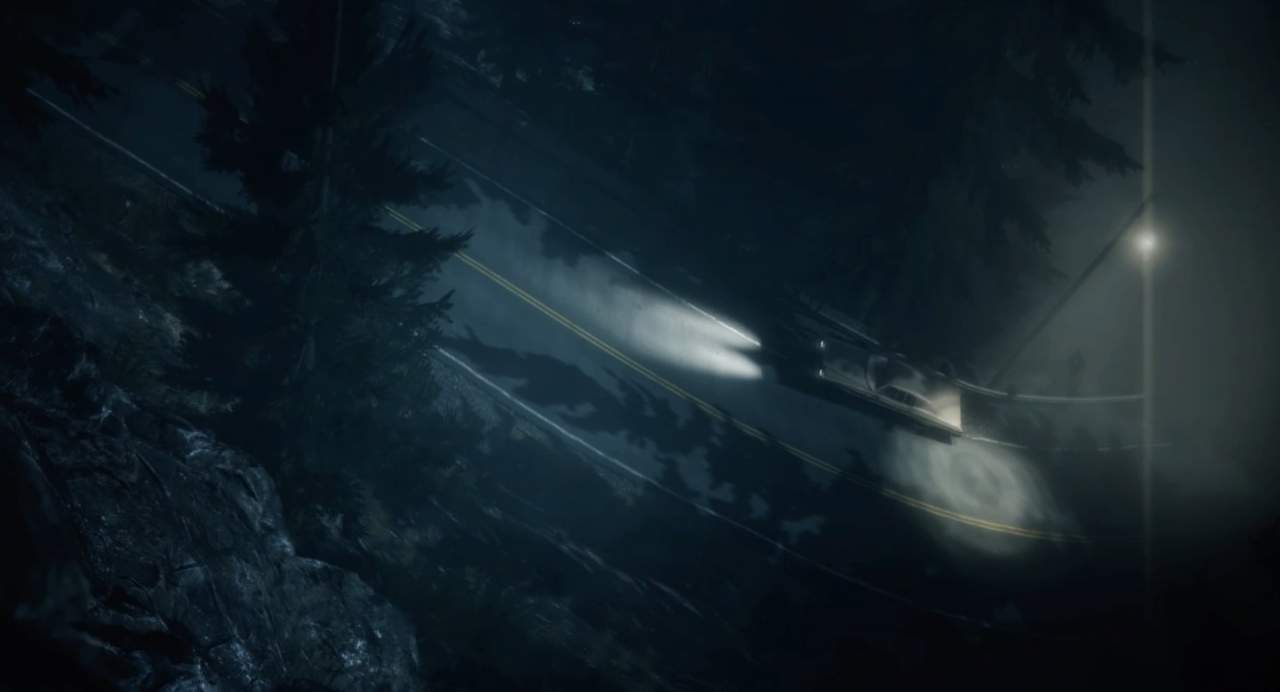 Much of the game is spent in the dark, creepy woods or traversing up rocky, mountainous paths, leaving the player to feel almost as exhausted as the panting Alan Wake as he scrambles from one confusing patch of forest to the next. “I had fallen off so many cliffs it was ridiculous,” the fictional writer quips during narration at one point immediately after falling off another cliff, seemingly channeling the thoughts of the player behind the controller.

Though running through confusing forest landscapes can get tedious, the game does a good job of keeping things from feeling repetitive; just as you find yourself thinking about taking a break, the game brings you to a mess of fallen trees to traverse, abandoned shacks to ransack, and navigation puzzles to solve. Wake makes his way back into the town many times, among other places, interacting with everyone from star-struck residents to trigger-happy cops.

Ultimately, this survival-horror shooting game is all about the story. Players don’t need to fuss with complex crafting systems or other trappings found in many modern survival titles. The core of your weaponry resides with bullets and light — all of it found in caches around town in the forest — while encouraging players to focus on the supernatural and psychological horror that plays out. You literally fight darkness with light.

Fans who played the original title will find that nothing, visuals aside, has changed. For everyone else, they get to experience the plot twists themselves, potentially ushering in a new wave of Alan Wake fans.

If you’ve already played the game and you’re looking to re-experience the title, your big questions likely revolve around the quality of this remaster. When compared to the original version, Alan Wake on the latest-generation consoles offers a far better experience. Some of the cutscenes involving Bright Falls look stunning in 4K. Likewise, textures are drastically improved, adding a nice dose of realism to everything from wood planks to fabric. 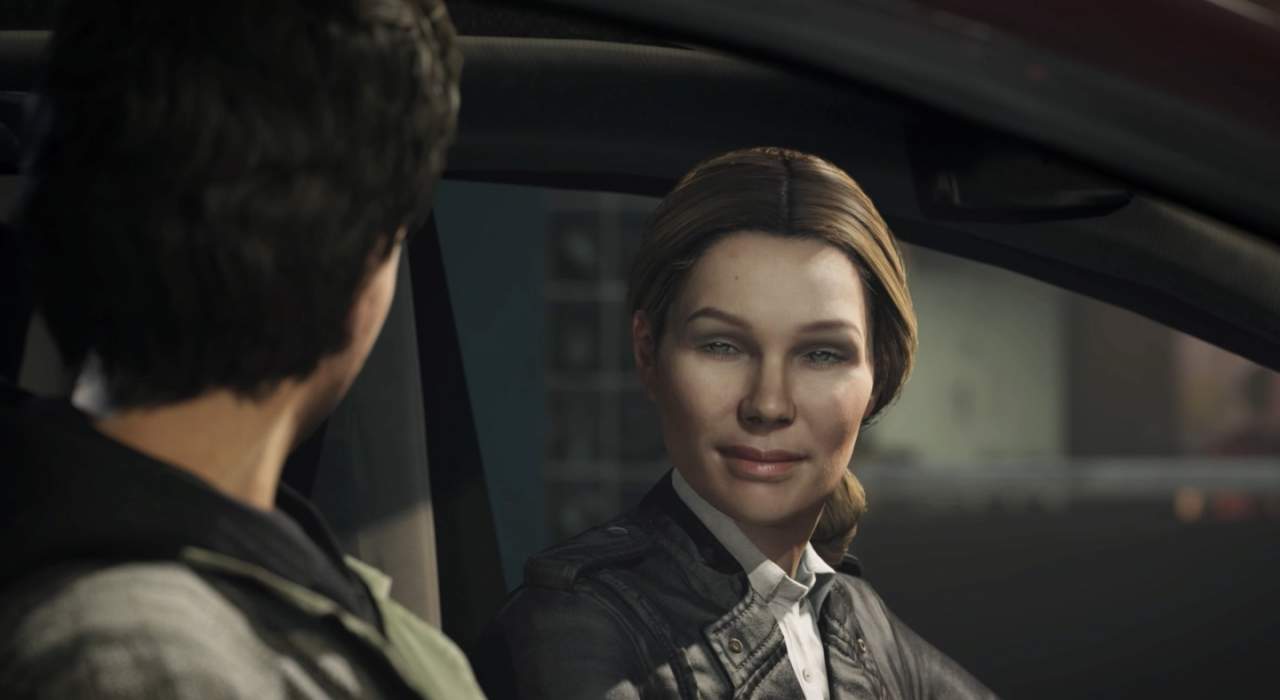 We played the remaster on the PlayStation 5 console and it ran buttery smooth, also upping the immersion factor with support for the Dual Sense controller’s adaptive triggers. With that said, no one will mistake the remastered game for a full remake of the game, and this is most apparent during the cutscenes. The characters look wooden and stiff compared to what you’d get from a modern title and you may find yourself wondering whether you’ve accidentally grabbed the PS4 version.

These stiff characters aren’t enough to detract from the game experience and the updated graphics do represent a huge update for the aging title. The atmosphere mixes crisp landscape graphics with enough fog and haze to turn light into defused rainbows, make wet surfaces glimmer, and perhaps trigger a yearning to take a vacation in the Washington rainforest.

Alan Wake Remastered remains the same game you may have played years ago, though one far more polished, offering the same survival gameplay crafted in such a way that players can immerse themselves in the excellent horror story. Alan Wake Remastered is available now on PlayStation, Xbox, and PC via Epic Games for $29.99 USD.