After a lot of talk, Google Play Music’s day of reckoning is here

It’s been a long time coming, but it looks like the end may finally be here for Google Play Music. Google, of course, has been warning us about this impending sunset for a long time now, as its plan has been to shut down Google Play Music ever since it revamped YouTube Music into its primary music streaming service. Google has been taking incremental steps to kill of Google Play Music for good, but now it seems the day has finally arrived – for some users, at least.

As spotted by Android Police, Google has starting showing notifications saying “Google Play Music is no longer available” in both the app and on the GPM website. In the mobile app, users are prompted to transfer over to YouTube Music, while the website gives users prompts to download their music libraries, delete their recommendation histories, and then delete their music libraries from Google’s servers. 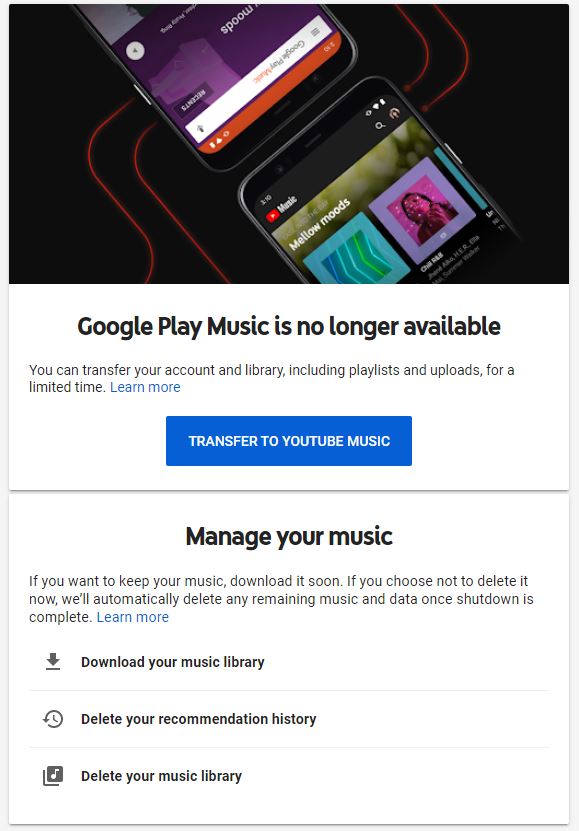 Once the shutdown is complete, Google will delete recommendations and music libraries automatically, so it looks like here it’s just giving users the chance to get it over with and wash their hands of Google Play Music now instead of later. Android Police notes that the Google Play Music app can no longer be used for offline listening, but somewhat annoyingly, the music you’ve downloaded in the past will still be taking up space on your phone – you’ll need to either uninstall the app or clear its cache and data through the app settings menu to free that space up again.

Google has been poking at Google Play Music members for quite some time now, trying to get them to migrate over to YouTube Music or at least get their GPM affairs in order before the shutdown happens. If you’ve got a music library stored in Google Play Music and you haven’t found a new home for it – whether that involves biting the bullet and transferring over to YouTube Music or simply downloading your music library and looking to other apps – now is the time to act.

Android Police points out that these notifications don’t seem to be going live for everyone just yet, but if you aren’t seeing them when you open the Google Play Music app or go to the website, it’s likely only a matter of time. We imagine Google will share more when the shutdown is finished and Google Play Music is well and truly dead, so stay tuned for that.