It’s a great day for those that like to blow off steam in public as Adidas has dropped several gigantic punching bags in the center of several Shanghai subway stations for all to fight with. Adidas is promoting the bags as “the first advertisement in history that you can kick, punch, and trample at will” [translated] and each bag is indeed available for the massacring by you and I in the stations as we speak. Reports of a general increase in concern over stress and fitness in China make this campaign a perfect fit. Will it change the world? Probably not. Will I kick it? Yes.

Ads have become munch more innovative in the past dozen or so years as companies have released that actual three dimensional figures draw the eye in a way that’s never before been possible. With a punching bag such as this, the user is not only drawn in, but invited to join in on the fun, the medium being the message with the ad being literally able to be engaged by the body of the onlooker. Punch away all day if you want to, or just jump on your train when it arrives.

This punching bag has a slogan printed on it which when translated to English reads the following: “Every year you have to wait on the platform for about 1,824 minutes. Don’t waste your time, come and have some punch !’” This bag is then accented with the ultra-simplistic three lines of Adidas at the bottom – as powerful a brand reminder as it gets. Get out there and hit em up! 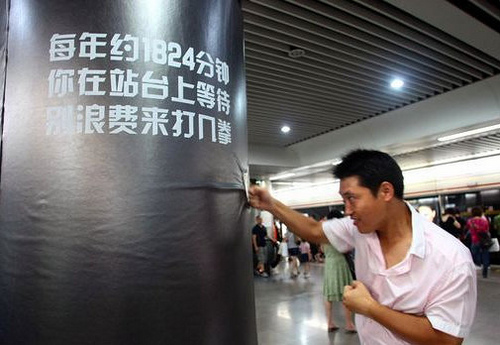