Acer has launched one of the thinnest, lightest laptops available with the new Swift 7 model. This insanely svelte ultrabook sports a 14-inch display, two USB-C ports, and an impossibly slim design that demands attention. The laptop arguably sets a new bar for ultrabooks as far as portability is concerned, but how does it perform as an everyday work and play laptop?

The Acer Swift 7 joins the growing list of laptops that are so light you’re left wondering whether someone forgot to install the battery. In fact, this laptop is so light you may overestimate its weight and pick it up with too much force, nearly dropping it from the unexpected weightlessness. When placed side-by-side, the Swift 7 is only slightly wider (9.95mm) than an iPhone 7 Plus. A US nickel coin placed against the closed laptop’s edge helps put the thinness in perspective: 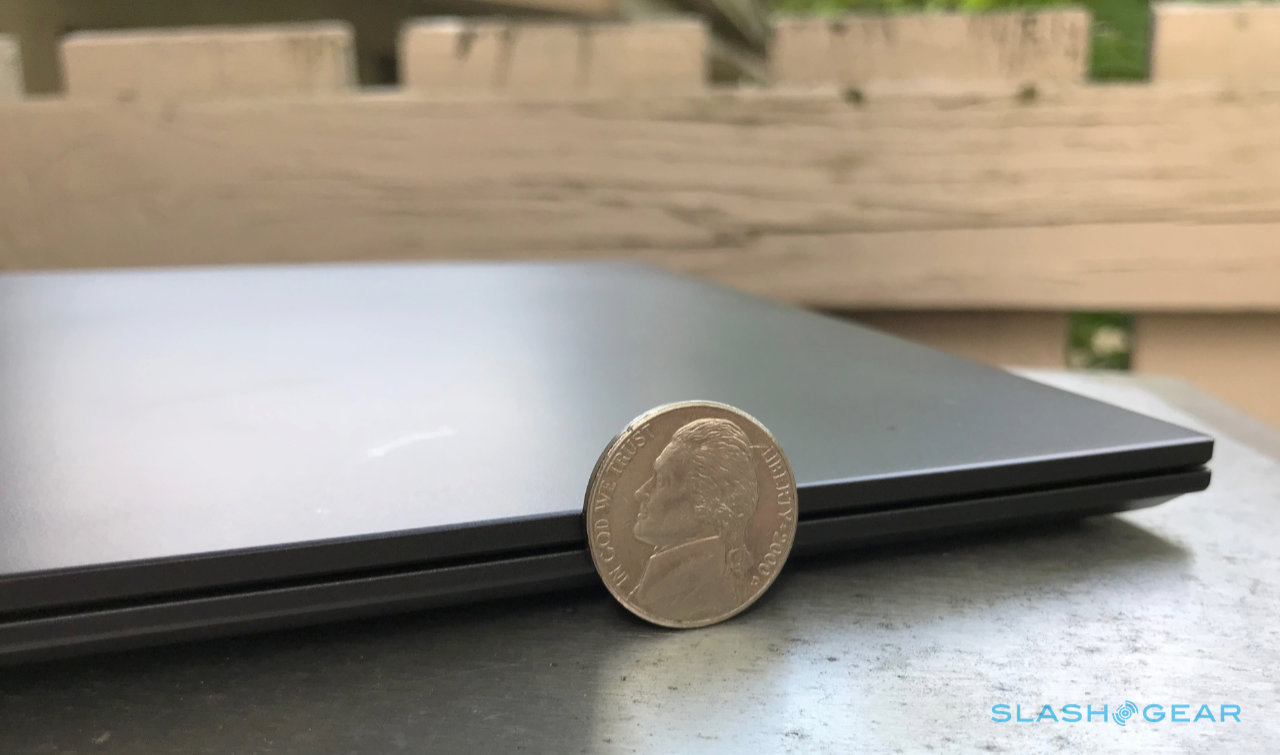 You need two hands to open the Swift 7’s lid; though it pops open with a single hand, the hinge is too tight (or the bottom is too light, depending on your perspective) to fully open the lid without holding the base down. Once open, however, the screen can be positioned at any angle without a hint of wobble. 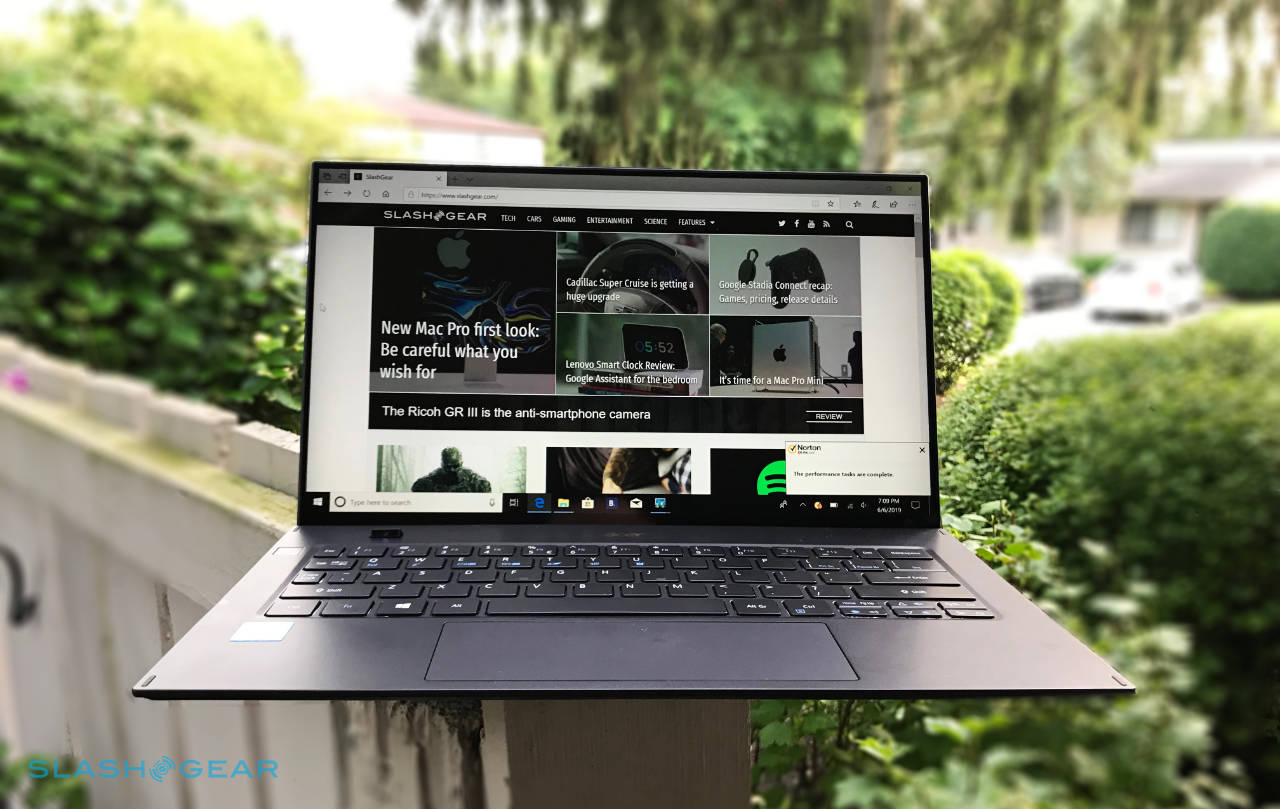 The first thing you’ll notice is the striking 14-inch 1920 x 1080 300 nits Acer CineCrystal display with LED backlight — it’s hard to ignore the combination of bright, crisp graphics and ultra-slim bezels. The second thing you’ll likely notice is the Swift 7’s massive trackpad, which offers far more real estate than what you’ll find on the majority of laptops. Getting used to the trackpad takes some time, however. I found myself accidentally resting my palm on it repeatedly during my first day with the laptop. 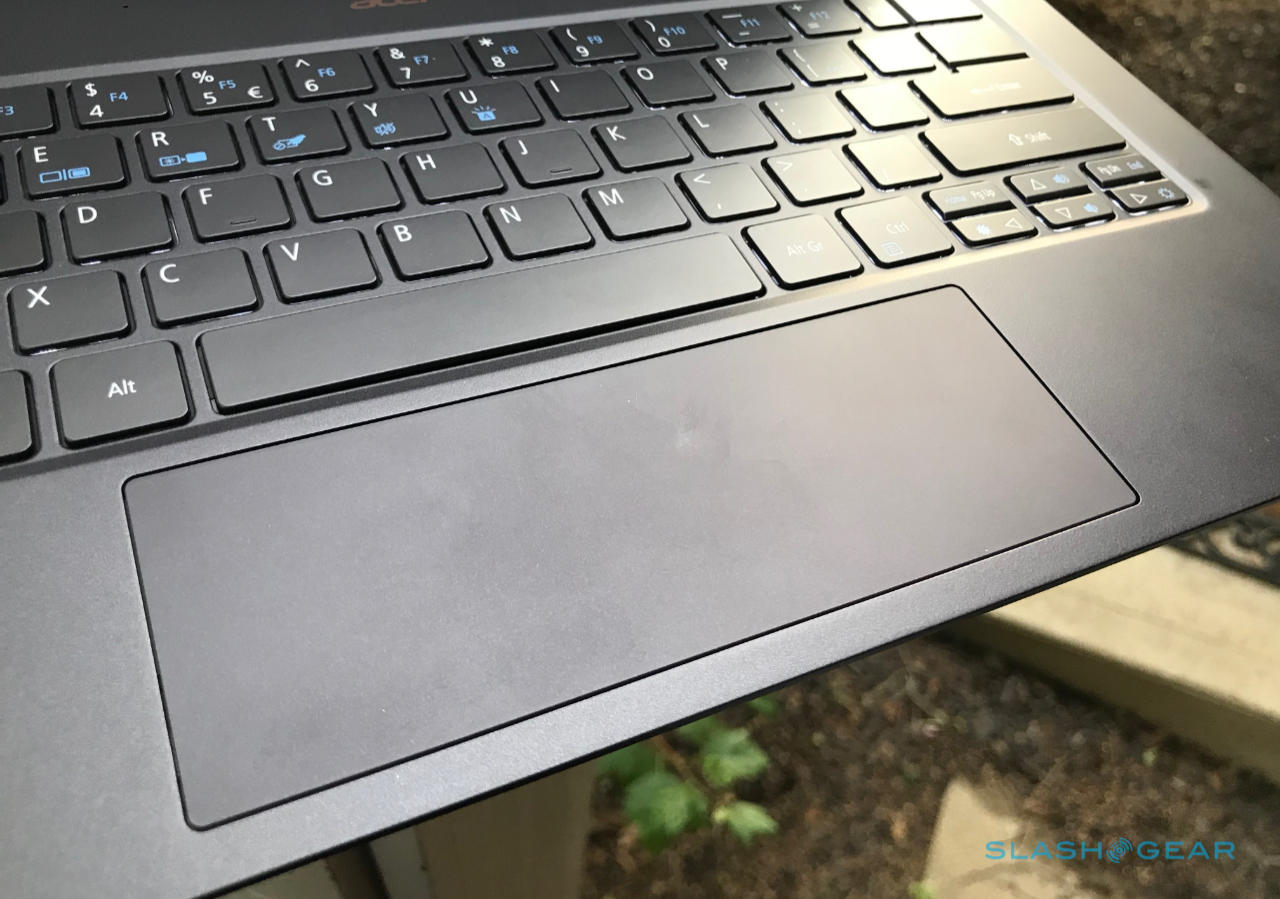 The Swift 7’s base is so thin that it must taper to a wider girth where the USB-C ports are located. As expected given the focus on slimness, this model only features two USB-C ports (one is Thunderbolt 3); you’ll need to carry around an included dongle if you have any sort of wired connectivity needs. The other side of the laptop features a couple LED indicators and a standard 3.5mm audio jack. 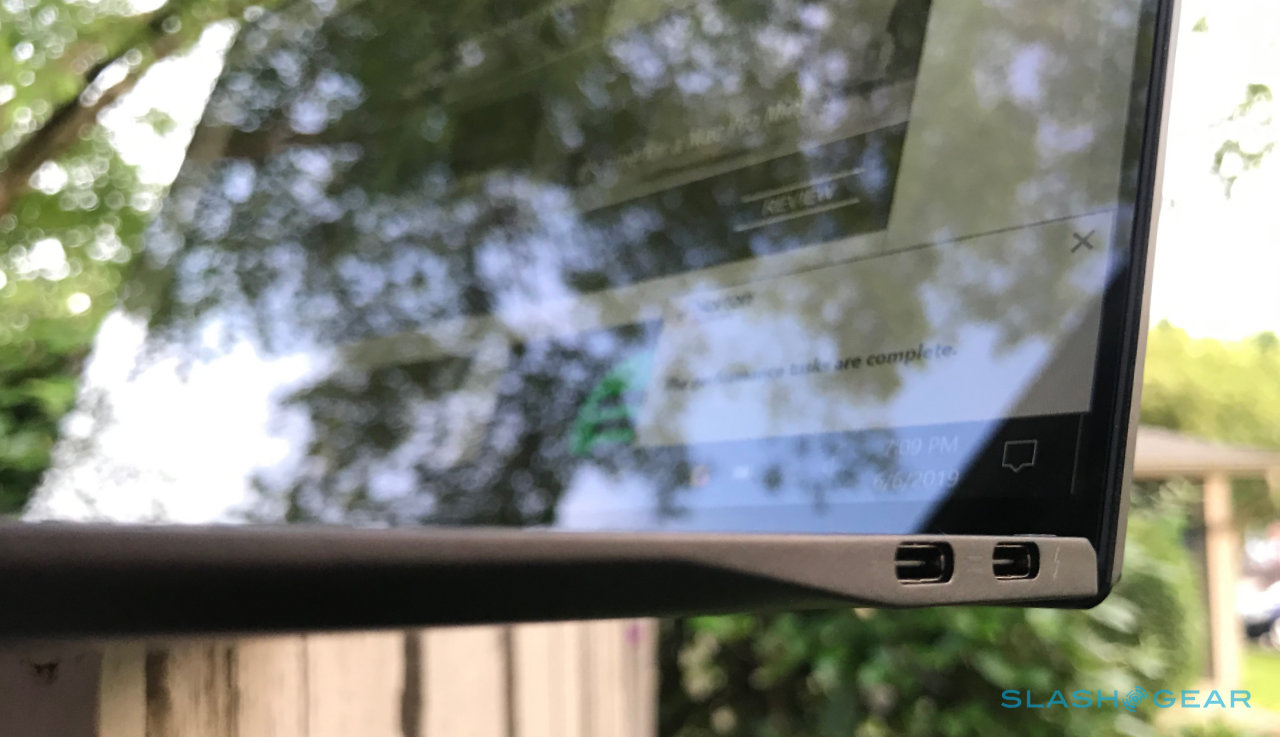 Due to the very slim bezels, Acer had to go with a pop-up webcam located near the power button, which lies flush with the laptop’s body and has a built-in fingerprint sensor. This webcam design comes with an obvious compromise: the video will be pointed upward at the user’s face rather than straight on, producing an unflattering angle.

Ultimately, the Swift 7’s design is quite minimalist, the sort of thing that’ll appeal to users who desire as few extraneous trimmings and unnecessary bits as possible.

NOTE: SlashGear received an early version of the Swift 7 that contains 8GB of memory, half of the 16GB that ships with the laptop in the US.

Due to the laptop’s thinness, Acer had to use the lower-power Intel Y-series Core i7-8500Y 1.5GHz with Turbo Boost to 4.2GHz processor. This means users shouldn’t have any expectations regarding gaming or using this laptop for substantial video or image editing. For general everyday tasks — Web browsing, streaming content, minor image or video editing, etc — the Swift 7 is more than capable. 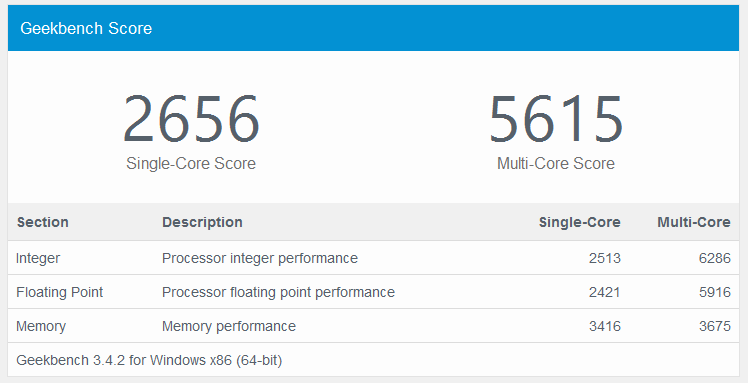 Acer says the Swift 7’s battery is only 2.6mm thick, which is around 37-percent thinner than what you’d find in the average ultrabook. The laptop can fully recharge from 0- to 100-percent in three hours, which isn’t quite on the same level as other rapid charging laptops, but still decent.

Battery life is likewise decent given the laptop’s slim build. With general daily work activities like Web browsing, occasional simple image editing, and streaming at various levels of screen brightness, the Swift 7 offered between 7 and 8 hours of run time. I could have probably squeezed more out of it by keeping the screen brightness low, but that makes it hard to appreciate the overall excellent display.

It’s only natural to question how well the Swift 7 will handle the rigors of daily work and travel due to its very slim build. According to Acer, the Swift 7 is made with magnesium-aluminum and magnesium-lithium alloys, which are four times stronger than aluminum alloys at the same thickness.

As well, the trackpad is made with Gorilla Glass 3 and the display features Gorilla Glass 6. The pop-up webcam is described simply as ‘durable’ and capable of withstanding 10,000 presses, far more than the webcam is likely to ever be opened. 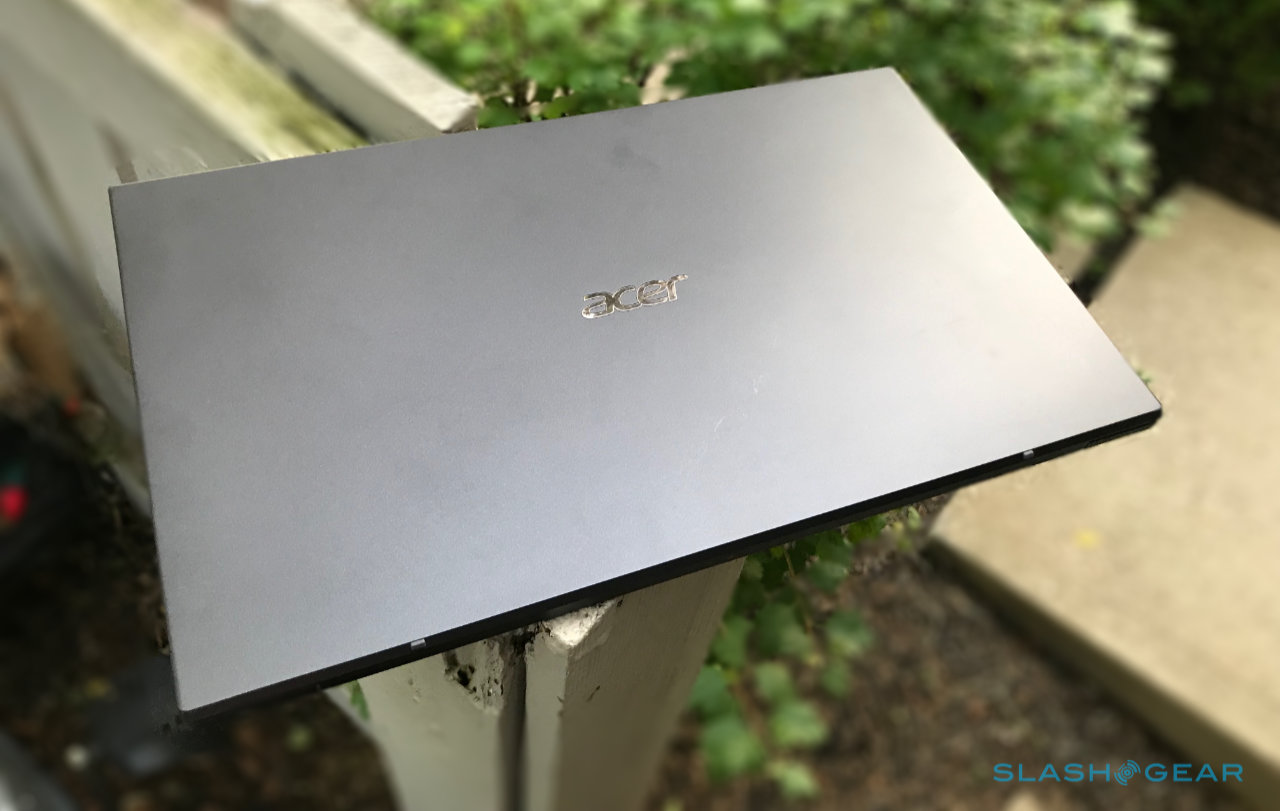 On paper, the Swift 7 is a durable laptop. When actually handled, however, consumers may find themselves questioning how well this ultrabook will withstand the impact of daily use. The laptop comes across as weak in certain regards — for example, when grasping the two front corners of the notebook, I can easily flex the entire bottom half with little effort.

In addition, the plastic used on this laptop doesn’t inspire confidence. Speaking purely in terms of durability, I have dropped my MacBook Air multiple times over the years, including a couple instances where it landed on one of the corners, including on a tile surface. It survived each drop, its worst damage having been a small dent on one corner.

I don’t feel confident that the Swift 7 could similarly handle striking a hard surface directly on one of its corners without sustaining potentially catastrophic damage. Put simply, the Swift 7 feels like a laptop I have to handle with ample consideration and care. I wouldn’t feel comfortable putting the laptop in a backpack without its accompanying case, which ultimately makes it a bulkier option than the MacBook Air. 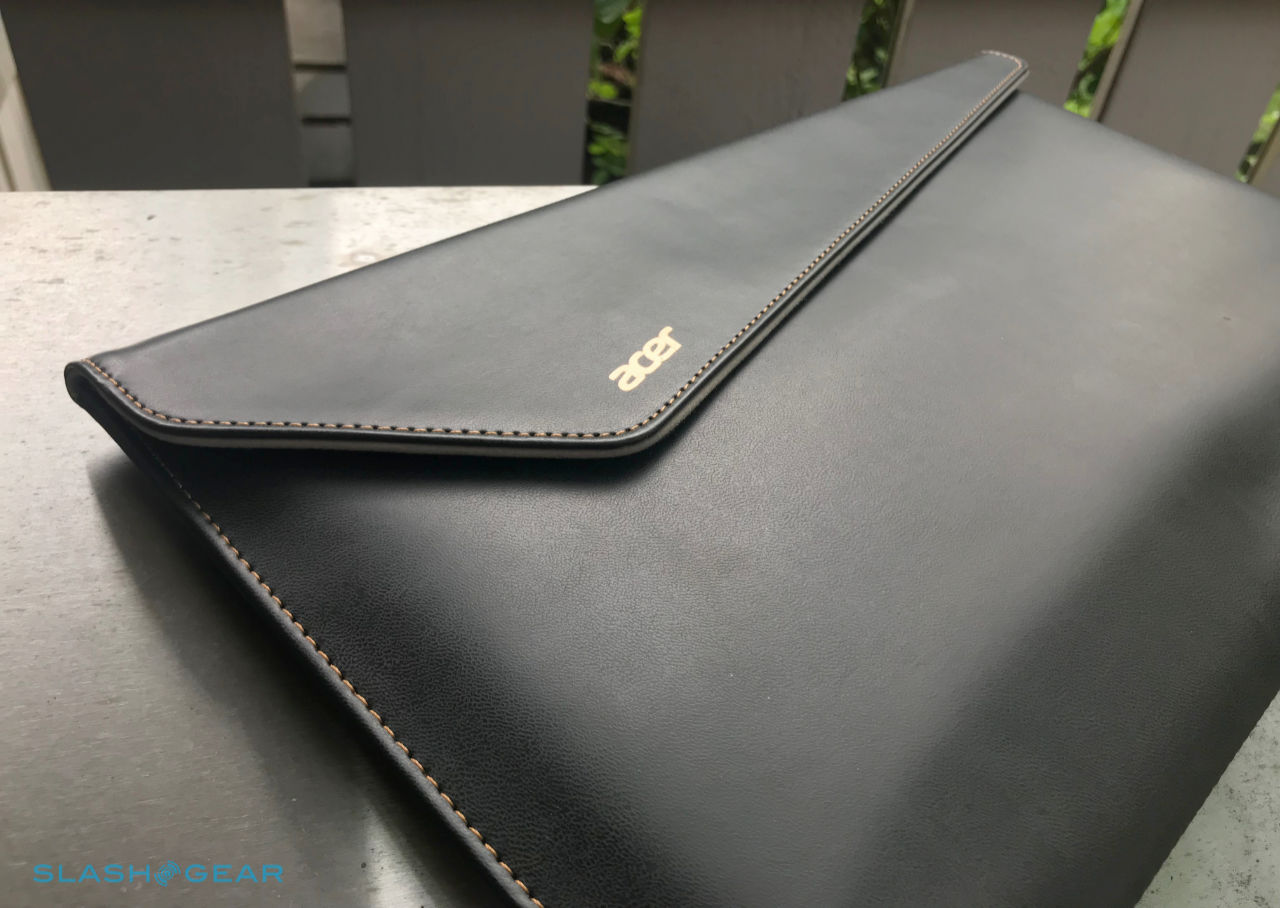 It goes without saying that the Swift 7’s incredibly slim, light design is the number one appeal for consumers in need of an ultrabook. What other notable elements does this model bring to the table?

– The display is gorgeous. As with the laptop’s slim build, the display is something best viewed in person. The screen presents users with a bright, crisp, and deeply saturated image framed by a barely-there bezel. Photographers and other graphics professionals will find the Swift 7’s display very pleasing.

– The fingerprint sensor is built into the power button, enabling users to both turn on the device and sign into it with a single button press.

– The included carrying case and dongle means users have everything they need out of the box.

I encountered one issue with the Swift 7’s design that greatly impacted functionality. As mentioned above, this model’s base can be easily flexed. This proved to be an issue when the laptop was used on a lap or even on a surface that wasn’t entirely flat. Simply resting my right hand on the palm rest when the laptop was on my lap was enough to cause the base to flex, which caused the trackpad to register a click.

This made the laptop unusable in those instances — it is impossible to do anything when the trackpad is essentially clicked down and held there. This issue persisted when the laptop was placed on a surface that wasn’t completely flat; as the gif below shows, the slightly amount of pressure caused the center of the base to dip, registering as a click.

This excessive base flex — and, in particular, its ability to ‘click’ the trackpad — forces users to keep the laptop on a flat surface. That’s impractical for many people, particularly those seeking an ultrabook for use while traveling when a table or desk may not always be available.

The Acer Swift 7 is an eye-catching ultrabook and there’s no denying the model’s attractiveness as a slim, minimalist laptop. Buyers get a modern, thoughtful aesthetic, but one that ultimately fumbles where it could have flourished. The thinness comes with a big price — both figuratively and literally given the model’s hefty starting price of $1,699 USD.

Customers who want a notebook that demands attention from others, takes up very little space, and that is imperceptible when in a shoulder bag will appreciate the Swift 7. Consumers who also put a heavy focus on functionality may grow frustrated with the model’s flexible body, lack of ports, and the persistent sense of paranoia about whether the laptop will truly withstand impact the first time it is dropped.