Leaked Acer slides suggest the company is planning a high-end nettop device that would use NVIDIA’s Ion graphics chipset.  The Acer Hornet is a small form-factor computer that would use either a dual or single-core Intel Atom processor, together with the 1080p-capable Ion, and be optionally VESA mounted on the back of a monitor.

Full specifications for the Acer Hornet are unknown, but it’s confirmed to have an HDMI output and a Wiimote-style motion-sensitive remote that can be used both for gaming and for general control.  The slides also suggest that the Hornet is “silent” in operation, although it’s unlikely to be fanless.

The NVIDIA Ion chipset is a high-definition graphics companion to Intel’s Atom range of processors.  Capable of 1080p playback without a significant hit on battery life, it’s prompted a marketing war between the two companies as Intel attempt to corral manufacturers into their own graphics platforms.  No word on when we could see the Acer Hornet officially announced, though the initial Ion systems are expected in the Spring; the presentation suggests it could be priced at just a “couple hundred dollars”. 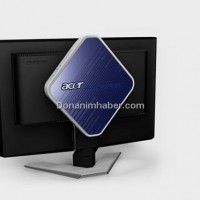