Unless you’re a hardcore gamer or a developer of some kind, you probably don’t have a huge need for a traditional desktop computer, and probably might get a laptop or even a tablet instead. However, desktops have a few advantages that make them worth sticking around for the foreseeable future, including easy upgradeability, more hard drive storage, and the general notion that you can get faster components for cheaper than what an equivalent laptop would cost. Acer still believes in desktop computers, and their Aspire ME600 is the perfect example of a computer that still has its place in a so-called “post-PC” world. Let’s have a look at it to see what makes it tick.

Design-wise, the ME600 isn’t anything special to look at — it’s rather bland actually, with a few unique design elements that make it stand out from the crowd, however. It’s your typical mini-tower setup with bays on the front and easy-access ports on the top, with everything else you need around the back. The machine has four USB ports on top, two of which are USB 3.0, and there’s also audio jack and an SD card slot. Overall, nothing too special there, with the exception that Acer likes USB 3.0, but isn’t willing to exclusively go the way of the new transfer protocol. 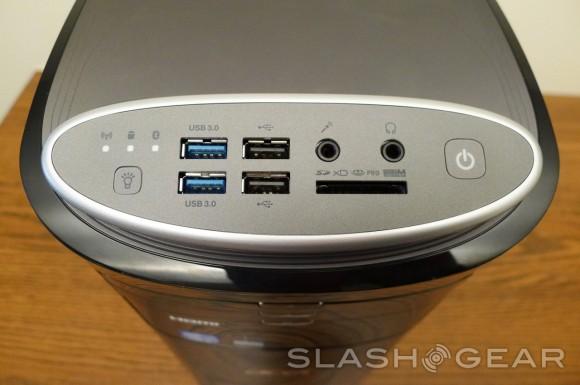 There’s room for two optical drives on the front of the case, one of which is already occupied by a laptop-style DVD-RW drive. We’re not sure why Acer included two spots for optical drives, especially in a world where even a single optical drive can be considered overkill. However, right below those two slots is a “hot-swappable” hard drive bay, that allows you to quickly change out hard drives without opening up the computer and getting your hands dirty. However, the drive bay isn’t technically hot-swappable, since you have to turn the computer off before messing around with it — not exactly ideal, but a dedicated drive bay like this will certainly turn heads. 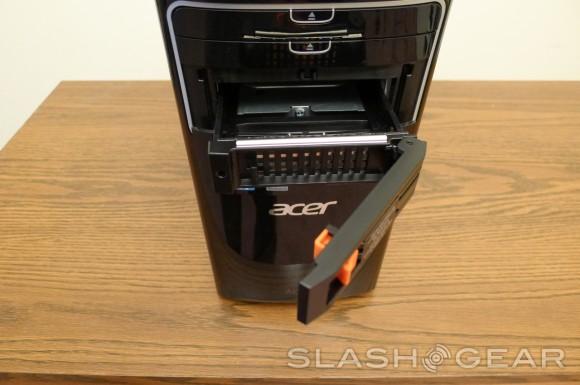 On the back, there are a bevy of connectivity options. First off, you have PS/2 ports for an older mouse or keyboard, which may be out of date, but can definitely come in handy during boot-up troubleshooting. There’s also a total of six USB ports on the back, two of which are USB 3.0, so you get a total of four USB 3.0 ports, which is fairly impressive. Other than that, you have HDMI, VGA, ethernet, and the typical audio ports. But wait, what’s missing? Ah, yes — a DVI port. The ME600 lacks a DVI connection. The addition of HDMI is great and all, but a lot of monitors still use DVI mainly, with VGA simply just being a last-resort backup option. We’re not quite sure why Acer left out DVI, but that’s certainly a huge oversight, especially for a desktop computer. 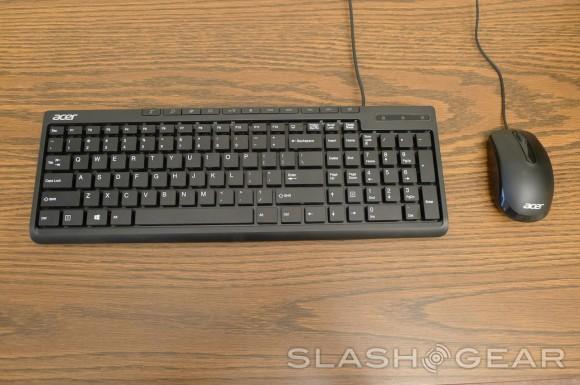 The ME600 comes with a keyboard and mouse for your convenience, both of which are USB wired. Of course, as with most OEM offerings, they’re not much to look at and are fairly cheap. However, they’ll get you by pretty easily. The keyboard actually has a unique design where there’s no plastic shell that wraps around and outlines all the keys — it certainly adds a nice touch.

As for the internal components on this bad boy, you’re looking at an Intel Core i5 3330 quad-core processor clocked at 3.0GHz with 8GB of RAM. That alone should be enough to definitely get you through your day’s work without hesitation. However, any graphic-intensive work you need to do will have to be postponed, since the ME600 only comes with Intel HD 2500 graphics. Then again, this machine isn’t labeled as a gaming rig, nor should it. However, the integrated graphics will certainly get you through Netflix marathons without a problem, and even some light video editing and encoding shouldn’t be too much of a problem, although it won’t be as fast as a dedicated graphics chip. Then again, there’s room for one on the inside if you ever decide to upgrade. 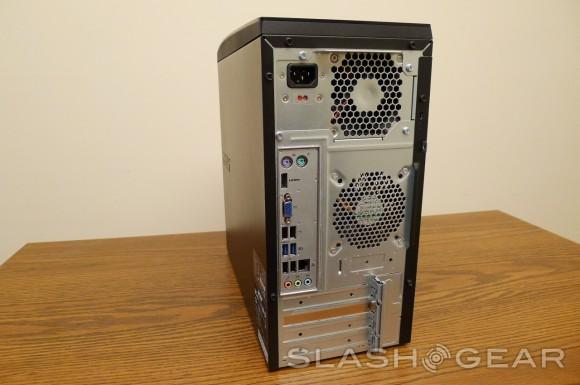 As far as storage space goes, you’ll be working with a full terabyte, which should be plenty of room for all your media, such as photos, home videos, music, etc. And if that turns out to not be enough, you always have that swappable hard drive bay at the front to easily add another terabyte or two to your setup.

Overall, specs look pretty decent for such a low-profile product. The quad-core Core i5 and the 8GB of RAM should keep you running all day long and beyond, and we can’t imagine most typical users would ever run out of storage space. Plus, if you’re fully committed to USB 3.0, the ME600 has you covered. The only serious downfall, though, is the lack of a DVI port. HDMI is certainly a nice feature to have, but a lot of LCD monitors still run natively on DVI, and while you could still use VGA, many of us are way past the analog days.

The ME600 is running your typical Windows 8 setup, but as with any OEM, Acer piled on a lot of bloatware. There’s only a few Acer-centric apps on the machine, including Acer Explorer and Acer Cloud, the former being an app that pretty much teaches you about all the apps on the computer, and the latter simply being a desktop app for Acer’s Cloud storage service.

As for other pre-installed software bits, there’s WildTangent Games, newsXpresso (RSS aggregator of sorts), Evernote and its companion app Skitch, Kindle, Skype, Netflix, Amazon, eBay, 7digital music store app, and the Cut the Rope game. Obviously, that’s a lot of apps, most of which are actually useful to some users, but they may just crowd your homescreen otherwise. And of course, you can’t forget the anti-virus software, in which Acer was kind enough to pre-install two options to choose from: Norton and McAfee.

Of course, performance of the ME600 is one of the most important aspects that you’re probably curious about. Everyday usage proved successful on this new Acer machine, with apps opening fairly quickly, although not as fast as some more high-powered rigs we’ve played around with. Then again, most casual users won’t mind. We were able to fire up Netflix and watch our shows in high definition without a stutter, and even playing a couple of 1080p Blu-ray rips was great — the ME600 chopped them up and casually ate them for breakfast without hesitation.

As for solid benchmarks, we ran the ME600 through our trusty Geekbench app, and the machine ended up landing on 9,800 for its score, which certainly isn’t bad at all for a mid-range desktop like this. Granted, it’s definitely not up to par compared to other rigs we’ve tested in the past, which have broken into the five-digit bracket, but as aforementioned, most casual and everyday users probably won’t complain about the performance too much. And if you really wanted to give the machine a speed boost, a simple installation of a solid state drive will give the ME600 the performance bump that any user will appreciate.

In the end, the Acer Aspire ME600 isn’t a top-end workstation for designers, but it also isn’t just a cheap desktop computer that you’ll get sick of in a few months. It’s a machine for casual, everyday users who want just a little more than what an entry-level machine could offer. The quad-core CPU, 8GB of RAM, and the 1TB hard drive should keep users humming along just fine, but the lack of a DVI port is a huge oversight. While it’s not a complete deal breaker, most users may not be completely happy with just a choice between HDMI or VGA. Then again, priced at a little over $500, the ME600 is reasonably priced to the point that most potential buyers won’t see it as a huge purchase necessarily, but yet they’ll definitely get their money’s worth. 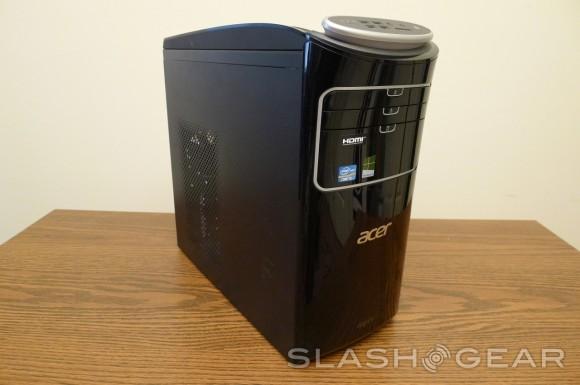