The mid-range desktop is a dying breed. With most consumers opting for laptops anyway, the primary reasons for choosing a desktop at all are to get below the $500 mark, get maximum performance for gaming or other media applications, or simply to have a semi-permanent installation with a larger screen than you an get while mobile. At $699, the Acer AM3970 represents one of a handful of models caught somewhere in the middle: a better processor and more RAM to get more oomph than budget desktops, but not so much that it’s a serious threat to machines closer to the $1000 mark. Let’s see how this one stacks up.

Aesthetics are secondary for a standard desktop, but as they go, the AM3970 is decent. A steel chassis is surrounded by glossy black panels on the front and top, with only two subtle blue LEDs for power and drive status – a plus in my book. The power button is placed oddly on the upper left corner of the right side, making seeing and using it tricky if you place your computer on the floor or to the right of your monitor. On the floor is certainly where it’s intended to be, with four USB ports plus a headphone jack and line in on the top of the computer. The eject button is also on the right side, implying that the computer is intended to be beside or below the user’s desk and to the left, and leaving little choice otherwise. Once placed there, using the SD/MicroSD/Compact Flash/XD/Memory Stick card reader becomes a chore, thanks to the black-on-black inlaid slots. 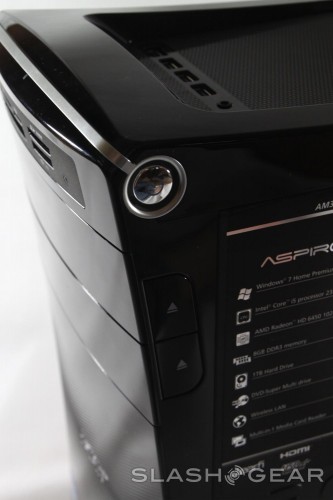 Move around to the backplate and you’ll find all the standards, with a generous helping of USB ports. The four ports on the top are paired to ten (count ’em, ten) on the back, leaving all but the most compulsive of plug-and-players well covered. Two of these ports use the new USB 3.0 standard – a nice touch. A pair of standard PS/2 ports are present for all you old-school Model M and Intellimouse enthusiasts. Our review configuration (AM3970-UR11p) came with discrete graphics and the on-board integrated VGA and HDMI ports disabled, with a DVI port and another HDMI taking their place on the expansion slot. Just below that you get a WiFi PCI adapter to compliment the gigabit Ethernet port, complete with detachable antenna.

Moving on to internals, the AM3970 comes with a 3.0Ghz Core i5 2320 CPU, 8GB of DDR3 memory (2×4 DIMMs) and a 1TB traditional hard drive. When compared to similarly priced desktop models from Dell and HP, Acer gives you identical components with an extra 2GB of memory. Along for the ride are a standard DVD-RW drive and a discrete AMD Radeon HD 6450 graphics card. Popping the access panel off requires a screwdriver (no thumbscrews) and while pre-built desktops like this one aren’t often made with expansion in mind, a reinforced back panel and a decent amount of room inside should make that easy enough for those who want to upgrade components later on. 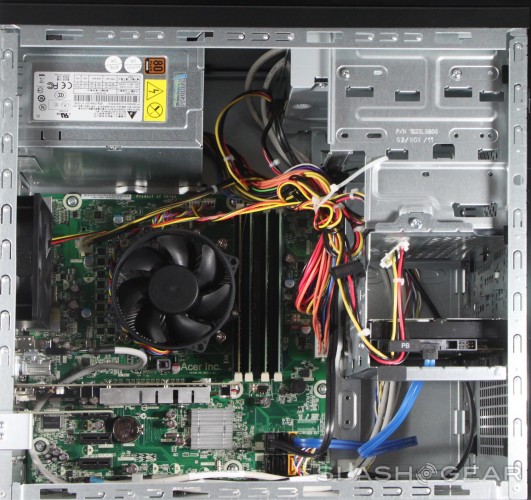 A mouse and keyboard are included, naturally. It’s hard to mess up an optical mouse, but the keyboard deserves special attention – and not in a good way. Long travel on the keys combined with a glossy backing will make cleaning a nightmare, and the mushy feedback had me reaching for my spare Microsoft model almost immediately. This is rather disappointing, especially when compared to the quite respectable keyboards Dell tends to include.

Acer includes the 64-bit version of Windows 7 Home Premium, the better to take advantage of that 8GB of RAM. Bloatware on basic desktops can be a problem, but on the AM3970 it’s better than I’ve seen elsewhere. Acer seems to be favoring static and easily deleted desktop shortcuts for a little promotional cash, which is fine by me. You still get a few extras that aren’t strictly called for, including the obligatory Microsoft Office trial and Bing bar, Norton Backup, Nook and New York Times readers, Evernote and Skype. With all that in there it would have been nice to see Chrome or Firefox, saving me a download. 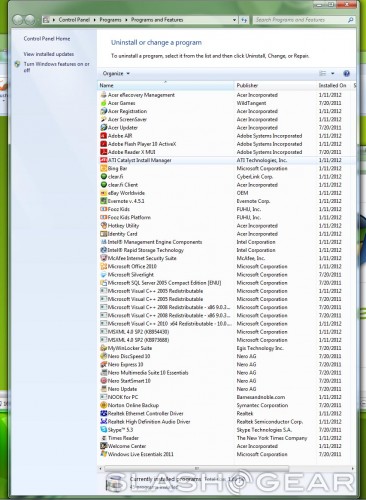 With the exception of McAffee’s nagging reminders, auto-starting software is blessedly limited and mostly silent. The rather superfluous MyWinLocker encryption software, Norton Backup and Acer’s Clear.fi sharing service are the only other hangers-on in the Startup tab. All things considered, it shouldn’t take much for even intermediate Windows users to get the AM3970 running exactly as they want it, with a minimum of tinkering – though I note without surprise that neither an OS install disc or or restore disc is included.

The combination of a Core processor and plenty of RAM makes standard tasks basically effortless on any modern machine, and such is the case here. But thanks to a little extra memory and the discrete Radeon HD 6450 card, the AM3970 is slightly more capable than its competitors who lack one or both. It should handle processor-intensive talks up to and including some light video editing with ease, and HD video playback is smooth in both local and online playback.

That Radeon 6470 won’t get you very far with the latest PC games, unfortunately, and the combination of a single DVI and HDMI jack means you’ll have to get creative with cables and/or adapters if you want have more than one monitor. That said, less demanding games like Team Fortress 2 and such should function just fine. 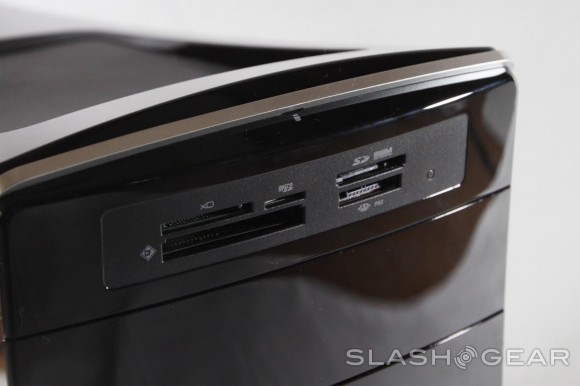 While there’s not much demand for the product category, the AM3970 definitely stands out in its limited field. Generous memory and discrete (if only just) graphics give it a performance boost that will satisfy most, and a ton of USB ports and a roomy interior make it suitable for hardware enthusiasts looking to expand. Software load is relatively light, and Windows regulars will feel right at home and unusually unburdened. The odd ergonomics of the case and downright awful keyboard are an issue, but should be easy enough to adjust to (or in the case of the keyboard, replace). All in all the Acer is a solid choice for those needing desktop-class power without breaking the bank.