With its bigger-than-palm-size scale, you can’t really call AAXA’s new M2 projector “pico”, but for a micro-projector it certainly offers reasonable specs. The $369 M2 supports an XGA 1024 x 768 resolution image at 110 lumens, and has 1GB of integrated storage together with an SD card slot and HDMI input.

There’s also a USB port – into which you can slot a USB memory stick for standalone playback (MP4/MP3/WMA/OGG/WAV/AVI/WMV/SMV/ BMP/JPG/GIF/TXT) via the M2’s integrated media player app – VGA and composite inputs, together with a 3.5mm audio output in case the stereo 1W speakers aren’t quite up to the job. AAXA even throw in a remote control.

At 132 x 145 x 47 mm it’s not the most pocketable mini-projector around, but for the price – on going from the specs on-paper – you’re getting a decent balance of performance and portability. One thing to remember is that the power supply is external, so this isn’t the model for your impromptu elevator pitches. 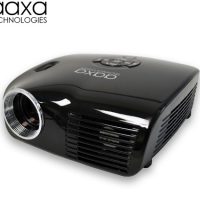 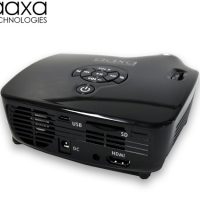 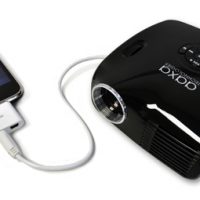 AAXA Technologies is pleased to announce the release of the AAXA M2 Micro Projector, the world’s first XGA (1024×768) micro projector. Weighing just 1 pound yet producing a vivid 110 lumen image with Vibrant Color technology, the AAXA M2 Micro Projector is the next generation ultra-portable multimedia projector. With power to produce 100” images*, a built-in media player, 1GB storage, and an array of input options, the M2 redefines what is capable in mobile projection technology.

The AAXA M2 micro projector is the most powerful and fully-featured micro projector in its class. The M2 employs a next generation optical engine with Vibrant Color technology producing high brightness and deep colors for a rich viewing experience. A high speed LCoS (Liquid Crystal on Silicon) imager and powerful Luminus PhlatLight LEDs are combined for the first time in the M2 to create a powerful yet efficient projection system.

The M2 mini projector is a stand-alone projection system featuring a new high-speed video and image processor supporting up to 1280×720 resolution video at 30 frames per second and a wide array of image and music formats. Content can be accessed through 1GB of onboard memory, an SD card slot, or a USB thumb-drive (USB OTG). The M2’s connectivity is unmatched with HDMI, VGA, and composite A/V inputs. Coupled with built-in 1 watt stereo speakers, the M2 projector makes for a powerful yet portable device that serves double duty as a standalone multimedia system and as accessory display for notebooks and other multimedia devices.

The M2 is available for sale at www.aaxatech.com for $369 and through our fine retail partners.